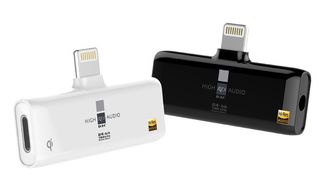 Apple risked the ire of music fans everywhere when it announced the iPhone 7 would not feature a 3.5mm headphone jack. Sure, you can use a pair of Lightning port-compatible headphones, but what about listening to music while charging your phone? That's where this Kickstarter project comes in.

Called Res, it's basically an adapter for the iPhone that adds a 3.5mm headphone jack as well as another Lightning port. Inside the adapter is a DAC that will upscale tunes to 24-bit/192kHz. It also doubles as a Qi wireless charger.

In other words, you can listen to hi-res music using your existing headphones while charging your iPhone, either wirelessly or with a Lightning cable.

This will be a blessing for anyone who doesn't want to replace their high-end headphones with a new Bluetooth or Lightning pair.

With a growing number of Android phones following Apple's lead and ditching the headphone jack, there are also USB-C and microUSB versions of Res.

It means sticking an adapter into your phone, sure, which is far from a perfect solution, but it may well be the best available at the moment.