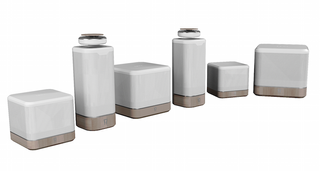 After bringing out the Air, a levitating Bluetooth speaker, Taiwanese company ASWY has gone one (or five) better, as it introduces the first levitating multi-room home theatre sound system.

It's not the only speaker we've seen with such a design; the Gravity speaker appeared to be floating and before that we saw the Crazybaby Mars 'levitating' speaker.

This system, which is called “Spaco” and aptly translates to “space”, consists of two omnidirectional levitating towers - the floaty magic performed via electro-magnets - one subwoofer and three satellites.

The home audio system is wi-fi and Bluetooth compatable so should allow you to stream Tidal, Spotify, Deezer and other services, controlled by voice or an app. It will also apparently have HDMI, optical, coaxial, and DC jack inputs.

The speakers are even said to have the extra functionality of being a pseudo-phone system. According to ASWY founder, Allen Wang, the two-way speaker and microphone in the system means that “users can talk to people in any room where there is a speaker placed, or through the app anywhere in the world, in real time, anytime.”

ASWY will be showcasing the Spaco system at IFA 2016 next month.