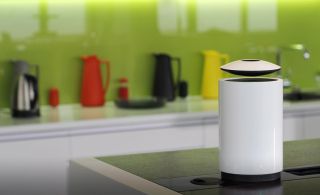 Mars is the company's new Bluetooth speaker, and it has already proved a success on the Indiegogo crowdfunding platform – raising far in excess of its $100,000 target with some 25 days left to run.

The most striking feature of the Mars speaker is its "levitating 360-degree sound projection", which sees the speaker floating above its subwoofer-cum-charging station. And it doesn't just look clever, the design also aims to reduce sonic distortion caused by sound wave absorption.

Mars comes equipped with aptX Bluetooth on board and is built from "aircraft grade aluminium", while the speaker "lands" on the base when out of battery and automatically recharges itself.

You can control the Mars speaker using your iOS or Android smartphone, streaming music via Bluetooth or the dedicated app. You can also pair two speakers together using the Mars app.

MORE: Read all our wireless speaker reviews and news

In addition to those features, the Mars comes with water, shock and dust resistance to the IPX7 standard.

Mars is available in either black or white pearl and it's anticipated the system will be shipped to early supporters from April 2015.

It's still possible to get a Mars speaker for $189 (plus $30 for shipping to the UK) by backing the Indiegogo campaign, which is scheduled to come to an end on 1st January.