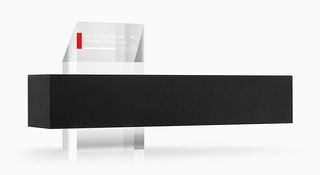 The speaker is manufactured by Meizu, a Chinese electronics company that makes smartphones and MP3 players, and designed by Kosho Tsuobi, a Japanese Buddhist designer.

The speaker itself has an aluminium body while the outer grille is made from a polyester fibre “specially designed for high-end speakers”. Behind the grille you’ll find two 3.2cm 20W drivers that cover 70Hz - 20KHz alongside two passive bass radiators. Meizu has also worked with Dirac to “recreate the original music scene” from the speaker.

You can connect to the speaker via wi-fi, Bluetooth or an auxiliary input, and a dedicated app for iOS and Android lets you access services including Spotify, Soundcloud and TuneIn, with more promised in the future.

Funding for the Gravity speaker is currently being sought on Indiegogo, where it has raised just over $25,000 of its $100,000 goal at the time of writing. You can pre-order a speaker from $169, with worldwide shipping expected from December 2016.