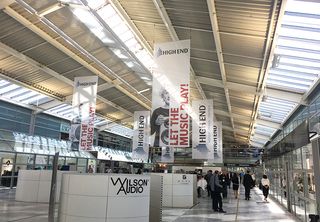 But Munich is also a haven for all kinds of crazy hi-fi kit with even crazier prices to match: extravagant turntables, brightly coloured horn speakers and the biggest subwoofer we've ever seen.

Scroll down to see some of our favourite new products and the more unusual, eye-catching expensive kit we saw at this year's show.

Let's start with KEF, which launched a new and improved Q series of speakers.

MORE: New KEF Q Series speakers aim to be better than ever

Also on demo were the mark-two versions of the flagship KEF Muon speakers (yours for just £140,000) which feature the latest Uni-Q driver.

Monitor Audio launched the sixth generation of its popular Silver series of speakers.

And Dynaudio celebrated its ruby anniversary by unveiling the €3000 Special Forty speakers - in high-gloss red birch (pictured) and grey-birch finishes.

Also in the Burmester room were these stunning, mammoth speakers.

We're short on details, but we can tell you that they're called the BC 350s, the price will be six figures (naturally), and there's a potential launch date of 2018.

Are they not a sight to behold?

Another debut turntable we spotted was the Mark Levinson 515 (price starting at $10,000), which was launched earlier this year at CES 2017.

Of course, there were far more extravagant turntables carrying heart-stopping price tags on show at Munich.

Transrotor had an entire room full of shiny, expensive turntables, but the 4ft tall €118,000 Artus stood out for us.

We also spotted this sleek turntable from Continuum Audio.

But 'the most talked-about turntable' award goes to… Mag-Lev Audio's floating turntable.

This Kickstarter-funded deck floats on magnets, looks super-cool with that orange lighting underneath and will cost €1400 when it goes on sale by the end of the year.

Just like last year, Focal's centrepiece was its flagship Grande Utopia EM speakers (£110,000) on a spinning pedestal - except this year it showed off a striking new orange finish.

No official word yet on how much the SC-C70 will cost, but it's rumoured to be under a grand.

It's a purely analogue amplifier featuring a class A/B design and will cost around £5000.

We were also excited to see the PMC BB5 SE speakers - €39,000 per pair. Pictured here are the hi-fi versions of the original BB5s (PMC's first speakers) that have permanent residence in the BBC's Maida Vale Studios.

Wilson Benesch had its new Resolution speakers - priced at £35,500 - on demo, paired with CH Precision electronics.

Now for some of the more unusual and outrageous kit at the Munich Show.

Here's a closer look at that glorious TEAC reel-to-reel running the demo.

(We're calling it: reel-to-reels are making a comeback.)

More horn speakers? Sure thing: here are some colourful Duos from AvantGarde Acoustic.

Pathos wasn't launching anything new, but we do like those distinctive heatsinks…

The most impressive room, however, contained this: the original Silbatone Acoustics Western Electric Mirraphonic M2 system from 1934 - a gigantic horn-speakers system designed to fill 3000-seat theatres.

Pictured here is just ONE speaker.

There's only one way to end this Munich round-up, and that's with a 50in subwoofer.

For size reference, our technical editor (pictured) is around 6'2".