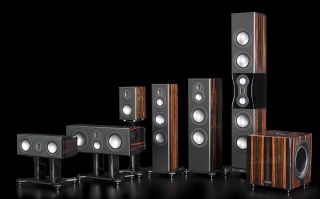 Monitor Audio's current Platinum series has been around for nearly 15 years, and we've been using it as the mainstay of our surround sound system in the What Hi-Fi? home cinema test room for several years.

But it's about to be replaced with the all-new Series II which goes on sale in January. Although it will be officially launched at CES in Las Vegas in January, we managed to gain a sneak preview. There are seven speakers in the range, starting at £3150/pair for the PL100 II standmounters up to £15,000 for the nearly 2m-tall PL500 II model.

One of the technical highlights is the new Micro Pleated Diaphragm (MPD) high-frequency transducer used across the range. This uses a thin, low-mass pleated diaphragm with a surface area eight times larger than that of a traditional dome tweeter, which is said to offer greater accuracy and efficiency.

Monitor Audio says its MPD tweeter operates with a uniform output to over 100kHz.

As for the RDT II bass and midrange drivers, they use a composite 'sandwich' structure made from ultra-thin low mass skins, bonded to a honeycomb Nomex core material. Unlike the RDT construction for the original Platinum, which used two C-CAM skins, the RDT II uses C-CAM for the front skin and the rear skin is made from a woven carbonfibre material.

In addition, Monitor Audio's engineers say they have reduced distortion at the upper end of each driver's range by coupling the voice coil with the cone using a nylon ring in place of aluminium. This so-called 'Dynamic Coupling Filter' (DCF) is said to act as a solid part up to the crossover frequency, and above that it acts like a damping spring, reducing the transmission of energy between the voice coil and cone.

An improved crossover design incorporates new air core inductors in the mid-range and tweeter sections and laminated steel cores for the bass sections.

Platinum II's bespoke speaker terminals are precision milled from solid copper with Rhodium-plated conductor parts. The terminals can accept a spade, 4mm banana plug or bare wire up to 4mm in diameter.

As befits a flagship range, there's a choice of natural wood veneers in Santos Rosewood or Natural Ebony, applied and hand-finished with 11 layers of clear gloss piano lacquer. They can also be bought in a piano black gloss lacquer. The front baffles are hand-upholstered in high-quality Inglestone leather. Each Platinum speaker takes up to 144 hours to make.