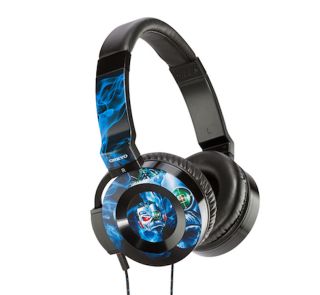 And the award for the silliest product name goes to... the Ed-Ph0n3s, a new pair of headphones born out of a collaboration between Iron Maiden and Onkyo.

The link up between the two was first mentioned at CES last January, when a giant version of the band's 'Eddie the Head' mascot appeared during the show in Las Vegas sporting a large pair of headphones.

Since then Onkyo's engineers have worked closely with Iron Maiden's founder member and bassist Steve Harris to fine tune the product. Finished samples were on display at IFA 2015 in Berlin - and the Ed-Ph0n3s are now on sale for £199/€299.

The Iron Maiden headphones use 40mm drivers with a Titanium coated diaphragm and have 'ported bass sub-chambers' to help deliver deep bass notes.

Ed-Ph0n3s were used by Steve Harris in the mixing of the new Iron Maiden studio album, The Book of Souls, released globally on 4th September.

Harris says the earphones are ideal for rock and metal music: "My main objective was for a balance that wasn't just top and bottom heavy with hardly any midrange like a lot of headphones these days that are basically designed for dance music.

"I wanted a good balance across the widest bandwidth incorporating a lot more midrange frequencies, something I strongly feel is vital to appreciate the complexities of our music and rock/metal in general."

Ever since Beats by Dre set the headphone world alight, becoming one of the most popular brands of accessories, and ultimately being bought by Apple for $3 billion, the floodgates have opened for celebrity-endorsed cans.

From Bieber to Gaga, they've tended to go down the pop/r'n'b route - but now there's a brand for those who prefer heavy guitars to heavy bass.

Maiden Audio made a quiet entrance at CES 2015 - well, as quiet as it's possible to be with a 12-foot version of the band's famous 'Eddie the Head' mascot - and now the Ed-Phon3s are available via Richer Sounds in the UK or online at MaidenAudio.com.

The band is certainly no stranger to merchandise, having pumped out everything from football shirts to mugs to their own beers since its inception in 1975.

Might they look and sound something like Onkyo's first pair of headphones, the ES-HF300s? It would certainly be a pretty good start and the "detailed midrange and treble" would seem to fit.

We'll reserve judgement until we've heard them of course, but with Harris claiming to have been working on the headphones for more than 18 months, let's hope they've not been, ahem, wasted years...