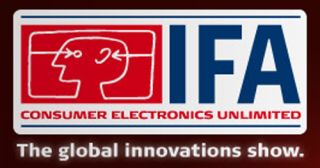 The 2012 show saw the launch of huge TVs from Panasonic, Philips Sharp and Toshiba, including 4K Ultra HD TVs, new Samsung Galaxy and Sony Xperia phones and tablets, plus plenty more new gadgets and tech from Bluetooth speakers to projectors.

We are once again on the showfloor in force at IFA 2013 in Berlin to see the best new gadgets. Read on for our round-up of all the product highlights and key trends...

Always a big presence, alongside JBL – a brand owned by the same Harman International group – we expected plenty of new products… and Harman Kardon deliverered on that front. We saw everything from headphones to wireless speakers to more substantial home cinema offerings.

The K545 replaces last year's K550, with a smaller form-factor than its precessor and a built-in mic to go with it. Harman reckon the K323 in-ear will be the "smallest and lightest" pair of headphones on the market, and judging by reports from IFA they are indeed tiny. The K845 BT boasts NFC/Bluetooth connectivity and 8 hours of wireless playback.

Harman Kardon and JBL split the duties with regards to wireless speakers, with the Harman Kardon Onyx (£429) revealed, along with the JBL Spark (£109) and the JBL Voyager (£229).

The Onyx is a full-range sound system with the trifecta of aptx Bluetooth, AirPlay and DLNA all on-board for wireless streaming. Four channels of amplification provide 60W (RMS) of power to four speakers: a pair of 7.6cm woofers and two 19mm tweeters.

The JBL Spark was revealed to be an unusual looking (above) megaphone-shaped wireless speaker, while the JBL Voyager is a portable sound system with a subwoofer docking system. When connected the Voyager turns into a 2.1 desktop system.

And there was more. Much more.

The refined looking Harman Kardon Soho (above, £249) was announced as well. Constructed with a stainless steel frame, the headphone comes with a choice of remote control microphone cables with an option for both Apple and Android users.

There was more on offer with a stack of new kit including the Sabre SB 35 (above), a soundbar Harman Kardon claims to be the world's "thinnest soundbar" (it has competition from Sony on that front).

Last, but not least, comes the Harman Kardon BDS range of surround systems. Five new models join the selection which will comprise of three 5.1-channel systems based around the BDS 580 AV receiver and two 2.1-channel systems which use the BDS 280.

Prices start at £749, with the units expected to be available from September 2013 onwards.

While CES is the traditional curtain-raiser for the bulk of kit from the big Japanese and Korean manufacturers, LG Mobile is upping the ante and we expect to not only see plenty of fanfare around the LG G2 phone – the first smartphone to support hi-res audio – but also the official launch of the LG G Pad tablet.

Will this tablet also support 24-bit/192kHz files? We shall see. Certainly LG is bigging-up the video quality of the 8.3 inch screen. Look out for our hands-on review.

Dual subwoofers are built in to the system, which is just 3.5cm high, and is capable of firing sound in multiple directions for a more immersive AV experience, according to LG. Bluetooth streaming capability is also included.

After seeing the 56in Panasonic 4K OLED TV at CES 2013, we might expect to see more 4K Ultra HD TVs at IFA and indeed OLED screens.

And we were right: the Panasonic TX-L65WT600 is the first 4K TV to feature HDMI 2.0 with support for 4K video.

Panasonic has confirmed that its prototype 20in 4K OLED tablet will also be on show at IFA – the world's slimmest and lightest tablet, no less.

As well as a heavy focus on the my Home Screen function on the 2013 Smart VIERA TVs, Panasonic will also be showing off their latest Blu-ray disc recorders and wireless audio products that offer greater connectivity.

Will our future be even more comfortable and convenient? Panasonic certainly aims to do so, with a new cloud-based concept across its AV range. Sounds intriguing.

Also new is a Panasonic SC-HTE80 Speaker Board, designed an alternative to a tradtional soundbar, plus a smattering of stylish wireless speakers.

Elsewhere, we'll be talking to some of the head honchos at Panasonic on the future of TV, 3D, 4K and of course whether they will confirm the existence of Panasonic plasma TV models for 2014... Stay tuned.

Another brand that always makes a song and dance at IFA – often literally during the company's weird and wonderful press conferences – this time Philips showed off the PFL9708 4K TV.

It's available in 65- or 84in sizes and equipped with the company's ambilight tech as well as its Ultra Resolution and Ultra Pixel HD Engine. Philips claims the set will be able to produce non-4k content with the same clarity and detail as native 4K content. Colour us intrigued.

Elsewhere we caught a glimpse of the 60in Elevation TV (again with ambilight technology) and two new headphones we predicted would be showcased; the Fidelio L2 and Fidelio M1 aptx Bluetooth headset.

The curious looking SoundSphere loudspeakers (intended to complement the DesignLine TV range) emerged along with the Fidelio SoundTower (right).

There were also two models in the new SoundStage range; a 2.1 channel stereo soundbar and another version that includes a 3D Blu-ray drive and Smart TV features.

All three models are equipped with DLNA, Wi-Fi, Wi-Fi Direct and Bluetooth for wireless streaming from compatible devices. The 'N500 and 'N700 get the added bonus of Miracast, which uses Wi-Fi Direct technology to mirror the content of your mobile device on a TV screen through the HDMI output of the soundbar.

The company has also confirmed that its 2013 range of network AV receivers, from the VSX-528 model upwards, and all its SMA wireless speakers will be compatible with Spotify Connect. More compatible Pioneer models will be announced at IFA and in the coming weeks, it says.

If ever there's a company that has a set of new products ready for any tech show going, it's Samsung. And so it proved with the launch of the Samsung Galaxy Note 3 phone, Galaxy Note 10.1 tablet and a Galaxy Gear smartwatch.

We're not so sure there will be much by way of new TV and AV products, though we did see the Samsung curved OLED TV which is now on sale in the UK.

And the Korean electronics maufacturer used the convention as the platform to parade the world's biggest Ultra HD display, measuring a lengthy 110in. We also saw a 98in UHD screen from the manufacturer, a reflection of the company's 4K push.

It wasn't all about being the biggest though, with a 31.5in UHD screen on show as well. There's no word on when, or if, these models will be available to consumers.

An AirPlay version of Scandyna's iconic SmallPod speakers will be unveiled at IFA 2013 in Berlin later this week, joining the aptX Bluetooth model already in the range. More details in our news story.

Then we had news of the Sony Walkman F886, a portable music player that supports high-resolution 192kHz/24bit audio files. The Walkman is back?

Their home cinema range received a boost with two new projectors, the VPL-VW500ES and VPL-HW55ES, announced at the show. And adding to the glut of new products were the HT-ST3 and HT-ST7 soundbars, both are out in UK in October.

We've not heard from Tangent in a while, but were intrigued to get a 'teaser' press release about this rather stylish looking new wireless speaker.

Details are thin on the ground right now (we don't even know its name yet), but we'll bring you more from IFA.

Toshiba made their presence known by unwrapping its three-strong range of Ultra HD 4K TVs, all of which will be in the shops later this month.

All have LED-backlit screens with smart TV functionality and HDMI 1.4 connectivity as standard. Expect a firmware upgrade to the new HDMI 2.0 standard in the near future.

We've got the lowdown on the new products from Yamaha and there's a whole host of new kit to get our teeth in to: soundbars, from the budget soundbar YSP-1400 to the extra-long YAS-152, the R-N500 streaming micro system and the second-generation Yamaha Soavo.

Subs, stereo amps and slimline AV receievers are also on the launch list. Head over to our news story to see all the new Yamaha products we know about: Yamaha IFA 2013.

We'll keep this article updated with all the new products as they are launched in IFA, which runs from Wednesday 4th to Friday 6th September...