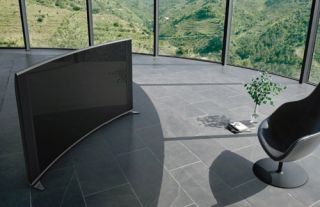 Sony's IFA 2013 press conference was jam-packed with new products and this curved LED TV almost snuck under the radar.

The curvaceous 65in screen follows in the footsteps of the LG 55EA9800 curved OLED and the Samsung S9C.

This Sony set claims to be the world's first curved LED (rather than OLED) and sports a screen with a full HD Triluminos display, the X-Reality Pro processing engine and dynamic edge LED backlighting.

The slight curve claims to deliver a wider viewing angle, while multi-angle speakers will take care of the sound.

There's passive 3D tech inside, too, and the set works with Sony's smartphone and tablet remote control app. MHL, Miracast and NFC technolgy allows you to get your phone's content on the screen, too. Maybe the new Sony Xperia Z1?

You can pre-order the set now in the US, but no word on UK release date or price as yet. Is curved the new flat where TVs are concerned?