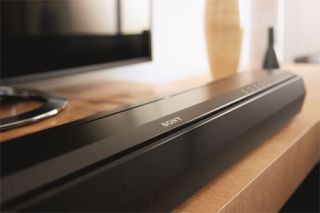 Sony has added to its soundbar line up at IFA 2013, with the announcement of the new HT-ST3 and the HT-ST7 (pictured above) soundbars.

At just 4cm high, the HT-ST3 boasts the bragging rights of being the world’s slimmest Bluetooth-packing soundbar, with 4.1 channels and a wired subwoofer, while the flagship HT-ST7 features 7.1 channels, Sony’s Magnetic Fluid speaker technology for a clearer, more detailed sound, and a wireless subwoofer.

The ST7 has been developed in collaboration with Sony Pictures’ Soundworks, with advanced signal processing that aims to reproduce music, dialogue and effects more naturally than ever before.

The cheaper HT-ST3’s focus is on being a super slim, low-profile sound bar, with an eye-catching contemporary design made from aluminium alloy with an etched stainless steel grille.

Both feature Sony’s S-Master Digital Amplifer for a rich, realistic sound, and use S-Force Pro Front Surround processing, which Sony says should create a room-filling soundfield and a wider sweet spot than usual.

Both also offer one-touch listening via NFC and Bluetooth playback, with support for apt-X and AAC codecs for the best possible sound quality.