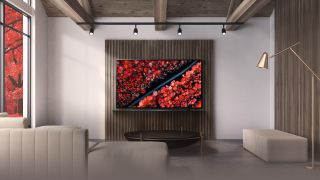 With two What Hi-Fi? TV Awards, including the most coveted Product of the Year honour, to their name, LG's 2019 OLED TVs prevailed as the TVs to buy for anyone after a big-screen, premium set.

Despite minor initial doubts over the foreseeable limit to OLED panel improvements, LG proved there's still plenty of life in the technology yet, bringing advancements over LG's 2018 OLED TVs.

The new 2020 LG OLED TVs are now hitting shops – and from our first impressions courtesy of the LG OLED65GX, they appear to continue to make progress. However, new TVs come with high price tags, so you may well want to consider a 2019 model that is now enjoying a tasty discount in its final months of shelf life. A sensible consideration indeed.

The big question is, which 2019 LG OLED TV should you buy?

A simple rule of thumb is to buy the biggest one you can. With all that extra real estate on your retina, bigger screens tend to offer a better sense of realism. Smaller ones looks sharper, given their higher pixel densities, but there's a greater opportunity to appreciate the subtlety of shading on a larger panel – and it's that that lends the sense of added depth and involvement to the on-screen action.

Obviously, this rule varies. A bigger TV is not always a better TV of course, but, if the panels and processors are otherwise equal, it tends to hold true.

The more difficult part is the decision over which LG OLED TV model to buy, especially when their names look more like car license plates. The trick is to tune into the important parts. For LG's 2019 OLED TVs, they tend to read something like: LG OLED55E9PLA.

The first four model letters (OLED) are obvious – they're OLED TVs! The next two numbers (55) refer to the panel size - in this case a 55in - and the following two (E9) represent the LG OLED range it belongs to. Here, it's the E9 series, but there are also B9, C9 and not so commonly W9 and Z9 ranges. The last three letters (PLA) are region specific so can largely be ignored.

Very briefly, the Z9 is the 8K OLED TV, of which there is only an 88in model, and the W9 is the LG Signature OLED - part of series of high-end style products across all of LG's catalogue.

The LG B9 and C9 are the ones you're more likely to see. So, that's where we'll begin.

The LG OLEDC9 and the LG OLEDB9 have the same OLED TV panels, both available in 55in and 65in sizes. They also both have the same excellent webOS user-interface, app selection and software and connectivity features.

The big difference between the two is that the picture processor in the B9, the 2nd Gen α7 Processor, is less premium than the one in the C9 – it's actually the same chip that powered the top-of-the-line 2018 LG OLED TVs.

The picture processor in the C9, the 2nd Gen α9 Processor, was new for last year and is the most superior chip powering LG's 2019 OLEDs.

Both the C9 and the B9 have the same style chassis, although there are some small differences to the colour of the brushed metal finish and the width of the stand. Ultimately, though, your choice between the two really comes down to performance.

We reviewed both the 65in LG OLED65C9PLA and LG OLED65B9PLA and were delighted with what we found. Both received five-star ratings and, while the superior C9 prevailed as the What Hi-Fi? Award-winner, we were pleased to see that the B9 was still exceptionally sharp and detailed for its cheaper price, with colours just as vibrant, balanced and natural.

The B9 doesn't quite keep up in terms of lighting control and contrast compared to the C9. While still very able in this department, the levels of detail in the very bright and very dark parts of the screen are not quite as stellar. There's still good textures in shadows and clouds, for example, but for that touch of finesse, the LG OLEDC9 TVs are worth the nominal extra spend, if you can find room in your budget.

Want a 77in LG OLED? The choice is simple, as of the two ranges only the C9 is available in that size.

The LG OLEDE9 is part of a breed of TVs that's best for people who don't want to use any kind of external device for their AV sound. While the panel tech and picture processing is the same as what's inside the C9, audio-wise it is in a different league.

There are more speakers (4.2-channel vs 2.2-channel), more powerful amplification (60 watts vs 40 watts) and the speaker positions are different. The C9's speaker array fires down from the rear with the scooping stand designed to funnel the audio forwards. It's a decent design but no match for the E9.

Look closely at the E9 and you can see a narrow, perforated piece of trim just below the screen, where the speakers fire directly towards the viewer. It's rather like having a TV that already has a soundbar built in and makes for a bigger and bolder soundfield with a greater sense of scale and composure. There's impressive weight and power, and enough of a rumble to really feel.

That added audio is certainly worth the extra money if an external sound set-up is out of the question, and we rate the 55in LG OLED55E9PLA as another five-star OLED from LG.

All the same, if your circumstances allow, a C9 and a class-leading dedicated sound system for the same combined money will offer a better performing, if not quite as neat, solution.

LG's even more premium W9 OLED TV range comes in 77in and 65in sizes. Although this is not a model we've had in for review, there's no reason to expect any superior picture to the C9 or E9 OLEDs. The W9 features the same panel and processor combo; the Signature products are simply as much about style and design as they are performance.

What LG has done with the W9 is remove all of the speakers and picture processing from the main unit and put them inside what is more or less a soundbar at the bottom of the screen. It's rather like what Samsung has done with its external One Connect box design, but this time the effects on the panel design itself are really quite incredible.

With all the guts relocated, what's left is a razor-thin OLED screen that's simply perfect for wall-mounting. It's less than 6mm thick. That screen attaches to the bottom unit by a TV to AV cable which can be buried in the wall to make one seriously stylish TV for your living space.

The audio set-up is much the same as the E9 with the front-firing 4.2-channel arrangement and 60 watts of amplification.

It's not an OLED TV that we reviewed, but we did have some hands-on time with the LG OLED88Z9PLA. It features an 8K version of the α9 Gen 2 Intelligent Processor and HDMI 2.1 connections for 8K/60fps content playback. The 8K content certainly looked impressive, even if the audio was disappointing.

Naturally, it has four times the pixels of all the other TVs on this list and it features both Dolby Atmos and Dolby Vision HDR support, just the same as the rest.

The sound arrangement is familiar with its 4.2-channel set-up with, and, this time, 80 watts of amplification. It also comes with its own, good-looking Art Furniture Stand.

While it may be a very good set, as a first generation 8K TV it's likely that there will be considerable improvements brought by the 2020 generation of LG 8K OLEDs. Instead of spending around £29,990 on the Z9, we'd advise you to take a close look at the £40,000 LG OLED88ZX9LA 8K OLED first.