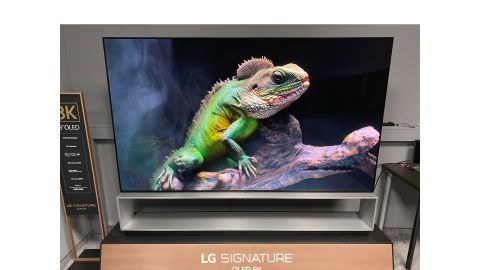 LG's OLED TVs continue to impress us with their picture quality, even in 8K form. All we need now is a plentiful supply of 8K content to watch on it. And a bank loan

LG’s 2019 4K OLED TVs have been remarkably consistent and visually impressive across the board, but what happens when you use this TV tech and quadruple the resolution?

8K TVs aren't exactly new – we've already reviewed the 85in Samsung QE85Q900R QLED and the Sony KD-85ZG9, but both of these are based on LCD TV tech. The OLED88Z9PLA is the largest and currently the only 8K OLED TV on the market. And we were invited to LG’s test lab in Nuremberg, Germany to put this £29,999/€29,999 set through its paces.

You’ll note this is a hands-on review of the TV rather than a full-blown review - this is for a number of reasons. We only had one day with the set and, while this was enough time to get a general feel for the LG and how it performs, an in-depth review would have taken longer and involved comparing it with rival sets at a similar size, which just wasn’t possible in the time allowed.

One thing you’re going to need if you can afford the LG OLED88Z9PLA is space, and lots of it. It’s quite something seeing this TV in all its 88in glory.

You might be tempted to try and bypass the stand and mount the panel on your wall, but LG doesn’t recommend it. The screen weighs 40kg on its own, hence the dedicated stand (which weighs an additional 62kg) to bolt it on to.

LG refers to it as the Art Furniture Stand, designed to ‘naturally blend in with your surroundings’. We’re not sure about it blending (is it even possible with a screen that size sitting on the top?) but the finished article looks quite a sight.

Like the majority of LG’s OLED TVs, the screen isn’t wafer thin all the way down. There's a panel which protrudes slightly and spreads across a large section of the rear. It hosts all the connections and tuners for the 8K TV, not to mention part of the TV’s 4.2-channel speaker system.

There are four, 8K-compatible HDMI inputs on the back of the OLED88Z9PLA which all meet the HDMI 2.1 standard and support eARC (Enhanced Audio Return Channel) and VRR (Variable Refresh Rate). Other connections include three USB 2.0 sockets, ethernet, optical and twin triple tuners (cable, satellite and aerial).

There are drivers tucked away in the panel which fire audio downwards, through two rectangular gaps in the top of the stand. Sound is then reflected off angled pieces of ridged aluminium and out towards the listener.

Right at the bottom of the base, running all the way along its edge, you’ll see a grille. Behind here is where the two woofers for the sound system sit.

If you’ve experienced an LG C9 or E9 OLED TV, there aren't many surprises where specs and features are concerned.

It’s powered by virtually the same A9 Gen 2 Intelligent Processor which features in models such as the OLED65C9PLA. The 8K OLED gets an upgraded version, though, to help it handle all the extra processing power the TV requires to make the most of lower-resolution content. The new version implements six-point noise-reduction technology as opposed to four-point tech on the 4K OLED models.

Stepping away from the screen for a moment you'll also notice the OLED88Z9PLA gets a new-look aluminium remote control. It’s still an LG magic remote at heart, so you can still wave it around and use the on-screen pointer to navigate menus. This new controller has basically been dressed up in a more premium suit but it does look and feel the part.

The newly styled buttons have a bit more room to breath compared with the normal remote. They’re satisfying to press and the TV is quick to respond. Hotkeys for Netflix and Amazon Prime Video are there, as are buttons for switching input and jumping straight into the main TV settings menu.

And the menu arrangement is still the same as the one you find in C9, E9 and W9. The TV’s running LG's colourful WebOS operating system, complete with ‘cards’ which represent different sources and apps. We’re particularly fond of ‘AI Preview’ which adds a row of relevant content above the app you’ve highlighted. For Netflix, you see your most recent streamed programmes and new content. There’s also Intelligent Edit, which automatically reorders sources and apps in the bar based on usage.

Before we started testing the TV, LG introduced us to a supplementary piece of kit we hadn’t seen before. It's a box about the size of two DVD cases sandwiched together that connects to the Z9 via HDMI and USB. We were told this was the LG’s new 8K decoder.

The thinking behind this box is to help make this 8K TV as future-proof as possible. Launching in December, LG claims the box can and will be upgraded over time so your 8K OLED will be able to decode any 8K content that manages to make it out into the mainstream.

After all, there's been no agreement over the industry using a single codec for 8K content. LG wants to make sure it can react on the fly and cut-off any potential compatibility issues.

So, in theory, you’ll be able to pass any 8K content, eg from a video streaming service, through the box where it will be decoded and transformed into an 8K image.

If you buy the TV from December, the box will come as standard, but if you happen to be one of the ultra-early adopters you’ll get one for free as soon at they become available.

One of the obvious issues with an 8K TV is the evident lack of content to show on it. For this test, LG provided us with a USB stick which had various scenes filmed in 8K on it; a mixture of nature, cityscape and landscape clips.

One particular scene featured a lizard perched on a branch. The detail and definition and texture on its skin was superb – it looked real enough to touch. From the spines running along its back to the bumpy skin around its chin, the LG delivers crisp lines and an impressive level of detail. Its predominant green colouring was vivid but not overblown and blended distinctly with the yellow and brown areas and the smaller spots of reds and pink around its mouth.

We were sitting a decent distance away from the screen (around 12ft) and although you could still enjoy the image moving closer, we found too much going on with the screen to really enjoy the whole picture.

The scene switched to a night-time cityscape with high-rise offices, shops and landmarks all punching through the inky black sky. OLED's traditional strengths come to the fore here, creating a great sense of depth and realism. LG's attention to fine detail appeared exceptional and you could pinpoint the finest of details with minimal motion issues.

If you're in the market for an 8K TV now, though, the best resolution you'll be able to send its way is 4K. So, we reached for a copy of Aquaman on Blu-ray. As Arthur and Mera encounter the Trench for the first time, the LG handles the stormy seas with great composure. Despite the upscaling that needs to be done to the deluge of rain, smashing waves and sea spray, the LG keeps a great grasp of the action and still manages to deliver loads of detail. The punch from the ribbons of lightning lights up the night sky, revealing the Trench in all their ugly glory.

We make the switch to the more natural-looking Planet Earth II 4K Blu-ray, and you’re never really aware of all the extra processing that’s going on behind the scenes. The Buller's albatross looks resplendent, its black and yellow beak crisply drawn, with the grey plumage around the face and neck appearing silky soft and smooth. It's a really accomplished picture.

Even the jump down to Full HD Blu-ray resolution is handled well. We decide on Fantastic Beasts And Where To Find Them and, to its credit, the LG OLED88Z9PLA doesn't appear out of its depth. When we’re sitting at a distance, it does a good job of hiding the drop in disc quality as Newt arrives in NYC. His blue jacket and brown waistcoat ensemble are nicely rendered with good detail and definition on his brown suitcase. You can tell it’s not as pin-sharp as the 4K version, but it still does a fine job.

We decide to drop down another level and watch the German TV channel Arte HD, which is showing Magic Cities, a cultural programme, in 720p. As we're taken on a guided tour of the city of Muscat, the LG once again puts up a good fight. Skin tones appear natural enough with fabrics textures relatively solid. Motion struggles are a bit more apparent, but for a screen of this size and resolution it’s not a reason to turn off.

LG has gone for a two-pronged attack when it comes to getting a sound out of the OLED88Z9PLA. It boasts an 80W 4.2ch system with the main speakers housed in the chassis of the TV with the '.2' subwoofers in the base of the stand.

Whether it’s an approach that works well, we’re not too sure. We’d certainly start by running the TV's AI Acoustic Tuning – the TV calibrates itself according to your room conditions using test tones and the built-in mic in the magic remote. You can then listen in standard mode or give high or low frequencies a boost if you see fit.

You’ve also got the option of turning on another audio mode called AI Sound. It uses an algorithm to create a virtual 5.1 effect but, although it sounds a bit more open with a wider spread, the trade-off is audio sounds disjointed, overly processed and lacking solidity. We’d keep it turned off.

Overall, the LG fares relatively well in the sound stakes, but it falls short of really wowing us. It sounds relatively large-scale, which is what a TV of this size demands, but bass is a bit muddy. Dialogue is clear and easy to understand when there isn't much on-screen action, but when it hots up during the opening battle in Guardians Of The Galaxy Vol.2, the balance can become a little messy. Everything sounds slightly boxy in the midrange, lacking clarity.

Can you justify spending £30k on a TV you won’t really reap the benefits from for a long time? It's a tricky one, although if you're in the position of being able to afford it and want to be at the cutting edge of TV tech, then your mind is probably already made up.

There’s no doubt the 8K footage we saw on the LG looked impressive, and you get all the picture benefits that OLED TV technology brings with it. Even 4K content looked good, but until 8K material lands, buying any 8K TV is a bit of a leap of faith.