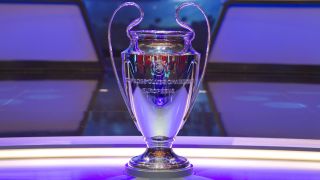 The UEFA Champions League has reached the quarter-final stage, and we're in Lisbon for an historic season-ending mini tournament.

It is a brand new format that is in place from the quarter-finals onwards, due to safety concerns and time constraints caused by the global pandemic, where matches will be played on neutral ground and a winner decided on the night.

Four nights of last-eight ties begins on Wednesday with Atalanta, in their first European quarter since they went out of the UEFA Cup in 1991, coming up against French champions Paris Saint-Germain.

It's a tougher test than it might seem for PSG, who are desperate to finally reach the semis for the first time since 1994; Atalanta finished third in Serie A this season, scoring a league high 98 goals in the process.

Whoever wins that one will only need to wait around 24 hours to find out their semi-final opponent, when RB Leipzig and Atlético Madrid will be entering the closing stages of their own quarter-final tie.

Both sides finished third in their respective leagues this season, with the German side looking to cement their place at the top table, while Atleti will hope to banish memories of recent Champions League final losses.

The headline tie of the round undoubtedly takes place on Friday night, however, when Barcelona face Bayern Munich. Only three clubs have lifted the European Cup more times than the five won by these two, and you'd be a fool to write off either making it six this season.

Their route to the final won't get any easier, though, with the winner of that tie facing either Lyon or this season's favourites Manchester City in the semis.

The French side knocked out Juventus over two legs in the last round, so they shouldn't be underestimated, but City will unlikely have a better chance of winning this competition for the first time than doing so this month.

The games will come thick and fast, interwoven between UEFA Europa League fixtures happening in Germany, with the showpiece final due to take place on Sunday 23rd August.

Read on to find out how you can see all the action, in the best possible quality, wherever you are in the world.

Football fans in Austria, Canada, Germany and Japan get the chance to watch the UEFA Champions League for free. DAZN has the rights to show the Champions knockouts and a whole host of sports in these territories, and, best of all, DAZN offers a 1-month free trial. So long as you've not used yours already, then you can fill your boots.

UEFA Champions League free with DAZN 1 month free trial
DAZN has the rights to the Bundesliga, UEFA Champions League, UEFA Europa League, US Sports, Fightsports, and much more live and on demand in Austria, Canada, Germany and Japan. Try free for 1 month. Cancel at anytime.View Deal

Sadly the DAZN free trial isn't available to those outside these regions. If you are a DAZN customer but travelling abroad, you'll need to sign up to a VPN service to make sure you can access the DAZN Champions League live stream wherever you are.

Watch the Champions League anywhere in the world using a VPN

Rights to show the UEFA Champions League in the UK belong to BT Sport, whose long-term deal to broadcast all matches from UEFA club competitions means you'll also be able to watch the Europa League.

You can watch the Champions League in 4K HDR, beamed at 50fps on BT Sport Ultimate, channel 433. If you're hooked up specifically on the BT TV platform then it's also available in with Dolby Atmos sound.

Watch the Champions League live in the USA

All times shown in BST.