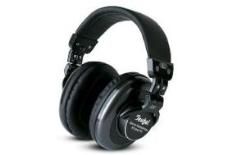 Unlovely to look at, uncomfortable to wear and disappointing to listen to. Look elsewhere

Everyone's noticed the effects of sterling's downward spiral in value against other currencies, but the likes of German loudspeaker firm Teufel are feeling it more than most.

When we first resolved to run the First Test rule over these, the pound was fairly strong against the euro. By the time we get around to publishing the review, that's all changed – and not to the Teufels' advantage.

Mind you, it's unlikely we'd have felt able to recommend the AC9050PHs even if a pound was worth a dozen euros. These 'phones are as flawed and unsatisfactory as anything we've heard in a while.

Dated looks, poor sound
For a start, we don't like the mid-'70s looks. Or the nasty vinyl earcups that make your ears hot, your head sweat and retain enough moisture to grow cress on. And then there's the sound they make.

Playing everything from John Lennon's Oh Yoko! to Carl Orff's Gassenhauer, the Teufels overstate low frequencies to a senseless degree.

Any nuance or detail lurking in the midrange is comprehensively swamped by the AC9050PHs overblown bass end.

And those bass notes are not only overstated, they're pudgy and ill-defined too. At least there's no hint of aggression to the top end, but that's not enough to drag the Teufels into contention