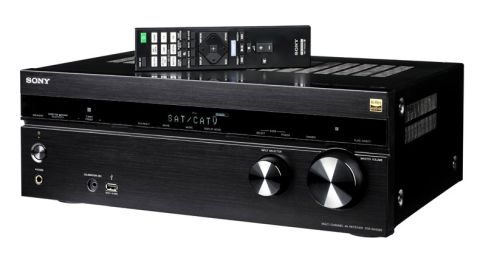 If you’ve recently been in the market for a home cinema amplifier around £500/$600, it’s likely you’ve heard of the Sony STR-DN1080. Not only is it a current What Hi-Fi? Award-winner, it's in fact a three-time Award-winner – an unprecedented move when it comes to AV receivers.

Even this long into the Sony's life, it’s difficult to comprehend anybody making a more entertaining receiver for this money any time soon.

It only takes a couple of minutes of listening to the Fantastic Beasts and Where To Find Them 4K Blu-ray and we’re grinning.

The Sony STR-DN1080 sounds fantastic, reaching deep into its reserves to deliver a performance packed with punch, dynamism and authority in a way we haven’t heard at this sort of price.

There’s an incredible amount of detail, from natural, expressive voices to layers of insight and depth surrounding each sound effect. As a glass window shatters under a spell, you can hear the sharp tinkling as well as the deep, sonic note rippling around the effect – it’s spellbinding to listen to.

Dynamically, it’s a fun and exciting listen. Quiet moments are as captivating as huge explosions going off in every corner of the big, open soundfield – and the DN1080 handles the changing shifts with masterful control. It’s enthralling.

We’ve seen John Wick more times than we’d care to admit, but the Sony STR-DN1080 keeps us glued to the action like we're watching (and hearing) it for the first time.

Gunshots are terrifically precise, and punches hit with satisfying impact. The agile and sure-footed manner in which the Sony conducts itself around the film’s equally agile choreography is admirable.

Surround effects swirl around convincingly and you can track exactly where each noise – whether it’s a spell, a crash, a gunshot or a magical creature – is placed in the soundfield. It envelops you in a cocoon of sound, and that’s before you engage the Dolby Atmos or DTS:X 3D soundtracks.

The additional height channels are convincing, although spreading the sound out more does take away a bit of the solidity of the bass performance. And there’s so much low-end depth and texture. It’s not quite as brawny as the Denon AVR-X2500H (or its successor, the AVR-X2600H), but the Sony pulls each bass note taut and makes an impact.

This amp has a rhythmic quality that lends itself well to music, whether you’re listening to a concert Blu-ray or streaming music from Spotify.

A home cinema amp at this level isn’t a match for dedicated stereo amplifiers such as the Rega Brio, but the Sony handles dynamic shifts and vocals in a fluid, articulate manner that sounds more musical than most amps.

High notes are reached with plenty of headroom. The sound is clear and crisp, but that vein of solidity running through the amp keeps it from sounding bright or harsh when the volume is cranked up. That’s one key criticism of past Sony amps dealt with.

The Sony is also demonstrably more detailed than the Denon AVR-X2500H, offering a bigger scale of sound with more grunt, drive and low-end depth.

To get the best sound for your room’s acoustics, plug in the set-up mic and run the auto-calibration process. Sony’s improved DCAC EX calibration takes note of your exact speaker package configuration before emitting swift and musical test tones. You can delve into the manual settings to fine-tune the results, though we are happy with the Sony’s largely accurate measurements of our test-room.

The DN1080’s interface is well designed and nice to use. Helpful menus guide you through the set-up process, as well as the new ‘phantom surround back’ and ‘speaker relocation’ features.

The first option adds in virtual surround rear speakers if you only have a 5.1 package, and the second one ‘corrects’ the positioning of your speakers if your room won’t allow for best place speaker placement. How effective this is depends on your room, but the sound does shift convincingly when used in our listening rooms.

Make sure you select auto format decoding (AFD) in the sound-effects menu to fully play DTS:X and Dolby Atmos soundtracks. Pure Direct – which cuts out all digital interferences – is worth enabling when you’re listening to purely analogue sources.

The STR-DN1080 is a substantial, hefty and well-built black box. The front panel features a handful of shortcut buttons, volume and input dials that work smoothly, and a simplified display that you can read at a glance. It’s a fuss-free, easy-to-use amp.

Using the light plastic remote control is intuitive, thanks to logically placed buttons. We’d prefer it to be backlit, though you do eventually get used to the shape of the most-needed buttons after a few days in the dark.

All the interesting stuff happens under the hood: Sony has used high quality components and advanced technology derived from its premium custom-install ES range of receivers in designing the STR-DN1080.

Not only can it play Dolby Atmos soundtracks up to a 5.1.2 speaker configuration, it also supports the newer DTS:X format. Of course, given the Sony's age, HDMI 2.1 is not supported, but all six HDMI inputs on the back are HDCP 2.2 compliant, supporting full playback of 4K HDR content. It’s worth noting the ‘video 1’ input is the only one not to support the full 4:4:4 chroma subsampling spec - all other HDMI inputs do.

There are two HDMI outputs, a handful of legacy inputs, single optical and coaxial inputs, and a USB port that can charge your smartphone.

You do get a few more connections on the newer Denon AVR-X2600H – eight HDMI inputs, for starters, and a couple more inputs across the board – but the Sony is hardly lacking in the connectivity area and there are plenty of sockets to plug in your sources.

Of course, it wouldn’t be a Sony product without some serious hi-res music support. The amp can play up to 24-bit/192kHz files in all popular formats, and will also play native double DSD files across HDMI and USB.

In fact, two of the HDMI inputs (titled BD/DVD and CD/SACD) are optimised for the best audio quality. Sony recommends plugging your favourite sources into these two.

The amp is further kitted out with the most popular streaming facilities – Bluetooth, AirPlay, Chromecast and Spotify Connect are all built into the STR-DN1080. The amp’s DLNA certification means you can play hi-res music files from any NAS device or laptop on the same network.

And let’s not forget multi-room: you can connect the amp to other compatible Sony products using the Music Center app (formerly SongPal) to stream music around the house.

After a gap year Sony came back fighting, with all the specs boxes duly ticked this time. The addition of Dolby Atmos – as well as other cutting-edge features – makes the STR-DN1080 a complete AVR package for a now eye-openingly low price of just £429 ($500, AU$1749).

Three years is a lifetime in home cinema technology terms, so the fact that this amp has won Awards three years in a row tells you a lot. It's such an accomplishment, we've inducted the Sony STR-DN1080 into our Hall of Fame - our list of the most important and influential products of all time.

High-resolution audio – everything you need to know