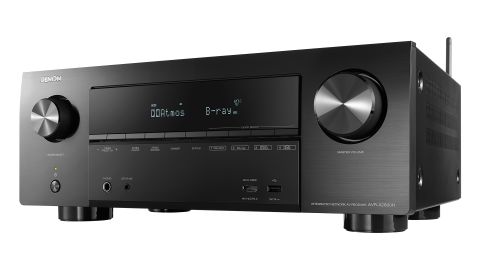 Denon has done it again: this multi-talented, future-proofed receiver can be bought in confidence

There are few annual events we look forward to as much as Christmas – birthdays and National Doughnut Day, perhaps, but Denon’s yearly new mid-range AV amp can be added to that list.

Like its predecessors, the AVR-X2600H pulls you in with an exhaustive feature list, and keeps you there with an equally compelling performance.

The Sony STR-N1080 (£429) remains a rival to the AVR-X2600H, as it was to the AVR-X2500H and, playing Elton John’s Rocket Man, performed live at Madison Square, it's clear that the Sony is still the mid-range master in terms of nuance, texture and cohesiveness.

But while not as painstakingly subtle or naturally musical, the Denon does give the Sony a masterclass in grandeur. There’s greater weight and overall heft to its claimed 150W per-channel presentation, in addition to superior scale and spaciousness, all of which amount to a thrilling presentation that’s nothing if not enveloping. After all, weight and scale are crucial talents for an AV receiver to possess – especially for owners who are partial to a summer blockbuster.

In Bad Times At The El Royale, for example, there’s huge expanse to the Vietnam War scenes, while the sounds of fist punches and overthrown casino tables during the climactic fight scene are impactful, with measured, three-dimensional thwack and thump.

Ultimately, the AVR-X2500H’s powerful, dynamic and detailed character reveals itself in its successor. During the recording session scene, there’s punch to the flamboyant He’s A Rebel piece, and the Broadway-esque group vocal is awash with detail, the delivery capturing the softer lilts of the harmonies as much as the bigger bellows.

Tonally sound, fast and well integrated, the X2600H proves an all-round powerhouse talented enough to transform your living room into an exhilarating home theatre when paired with a gifted speaker package, such as the Elac 2.0 5.1 Home Theater System or Q Acoustics’ 3010 5.1 Cinema Pack. Denon’s consistency is unsurprising, although it does mean owners of last year’s model needn’t rush out to upgrade.

Denon has managed to squeeze a huge number of features into the typical AV receiver dimensions, many of which will be particularly appealing to those wanting to take advantage of the ever-increasing accessibility of next-gen audio formats.

The 7.2 channels can be appropriated in a 5.2.2 configuration for Dolby Atmos and DTS:X formats, but for those without the extra height speakers, there is DTS Virtual:X onboard for the up-mixing of DTS soundtracks – to give the sense of height. Dolby Atmos Height Virtualization Technology, which essentially attempts to do the same with Dolby soundtracks, has been added since our review, via a firmware update.

The Denon's HDMIs (there are eight inputs, including one on the front, plus two outputs) aren't fully 2.1-certified, but they do support some 2.1 features. Important for Atmos fans, particularly those for whom their TV's built-in streaming apps are a primary source of content, is the AVR-X2600H’s out-of-the-box support of Enhanced Audio Return Channel (eARC). This allows the amp to receive uncompressed audio codecs (such as DTS:X, Dolby Atmos or TrueHD) from the TV via the same HDMI cable with which it sends video.

Auto Low Latency Mode (ALLM), meanwhile, gives gamers with compatible consoles, such as the Xbox One S and Xbox One X, a smoother, more responsive experience by forcing everything in the HDMI chain to enter its low-latency setting (usually referred to as 'Game Mode'). The latest Digital Content Protection standard (HDCP 2.3) is supported, too.

HDMI aside, there are smatterings of digital and analogue connections, including a front-panel USB input, two optical inputs and a phono and four pairs of RCA inputs.

While Bluetooth and Apple AirPlay 2 take care of streaming local files from a smartphone, tablet or computer, Denon’s HEOS hi-res, multi-room platform is also built-in, offering subscribers of Spotify, Tidal, Amazon, Deezer or TuneIn direct playback of each service’s music catalogue via the HEOS mobile app. This app also facilitates the streaming of networked WAV, ALAC and FLAC files up to 24-bit/192kHz and DSD 2.8MHz and 5.6MHz.

Talking of apps, Denon has another that acts as a fairly primitive remote control, but  Amazon Alexa voice control (via an Amazon smart device) is also supported, and there's the good old fashioned zapper, which is suitably good and, indeed, old fashioned.

You’ll need to set-up a Denon HEOS account to take advantage of the platform, and once out of the box, we’d advise taking half an hour of your time to configure the amplifier properly. Denon’s Setup Assistant takes you through everything from cable connection to network set-up to speaker calibration, the latter using Audyssey’s thorough and intuitive software.

Take that time and you’ll be rewarded with a well-performing, feature-packed and future-proofed AV receiver for all your movie and music demands. Denon has consistently proved its competitiveness at this price point over the years, and the AVR-X2600H follows in that long family line. If you have the budget and desire for a serious home cinema, this Denon receiver demands your attention.

Do bear in mind, though, that the AVR-X2600H's successor, the AVR-X2700H, has now been announced and will be reviewed by in the coming weeks.