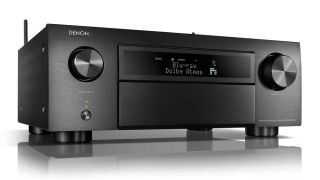 Denon has introduced its latest generation of X-Series home cinema amplifiers for 2020. Or, in other words, the successors to last year's Award winners.

Support for 8K pass-through (and everything else)

It’s hard to look past the headline feature: these are the first 8K-supporting home cinema receivers to be announced.

Each amplifier's 8K-supporting HDMI input enables 8K/60Hz and 4K/120Hz video pass-through (HD material can also be upscaled to 8K) and the playback of HDR formats including HDR10+ and Dynamic HDR (in addition to HDR10, Dolby Vision and HLG). They also support a new HDMI feature called Quick Media Switching (QMS), which allows a source to instantly switch the resolution or frame rate to eliminate screen blackout.

Naturally, these new Denon AV amplifiers cover the latest surround sound formats. The 11-channel AVC-X6700H and 9-channel AVC-X4700H support Dolby Atmos, Dolby Atmos Height Virtualization Technology, DTS:X, DTS Virtual:X and Auro-3D out of the box, while the 6700 will, later this year, also support DTS:X Pro, which allows up to 13 channels of DTS:X decoding with speaker configurations such as 7.2.6 or 9.2.4.

Both of these amps, as well as the 9-channel AVC-X3700H, can decode IMAX Enhanced soundtracks too. In addition to AirPlay 2 and Bluetooth, the HEOS multi-room streaming platform is built-in and offers direct access to streaming services, including Spotify, Tidal, Amazon Music HD and Deezer. Thanks to Roon Tested certification, the 2020 X-Series AVRs can be integrated into a Roon set-up too.

Last but not least, Denon has trickled down its ‘Pre-Amplifier’ mode from its 2019 flagship AVC-X8500H to the new AVC-X3700H, AVC-X4700H and AVC-X6700H. Pre-Amplifier mode provides more tolerance in clipping levels by disconnecting internal amplifiers when the receiver is used as an AV processor and all speakers are powered by external amplifiers.

We can't wait to take the new Denon AVRs for a spin, and with the first models due out in July, we're hoping it shouldn't be too long - so keep your eyes peeled for our reviews in the coming weeks.

How to combine stereo and surround sound in one AV system