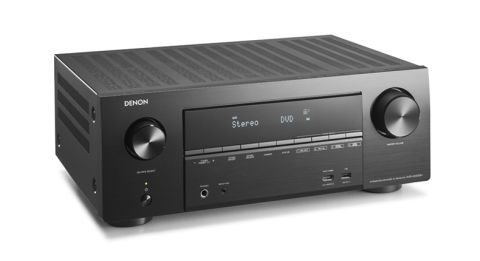 Five-star products don't take long to reveal themselves, and our decision on the Denon AVR-X2500H was straightforward in the end.

It is apt we came to Denon’s AVR-X2500H at the beginning of a new football season.

After its own pre-season of sorts, the company’s £500/$500-or-so home cinema amp  returned in even better shape – more muscular, and better toned.

It has been replaced in the company's line-up by the AVR-X2600H, but this remains a stunning proposition on which you can now get some pretty good deals.

Little has changed physically from the previous model, apart from a little rearranging and tidying – but that has never been a concern with these amps. We want them to be neat and, more importantly, robust, and Denon has adhered to those desires.

So it’s a familiar look: two large dials flanking the AVR-X2500H’s screen and strip of control buttons, with headphone jack and inputs for HDMI, USB and set-up mic along the bottom.

The remainder of the amp’s eight HDMI inputs, each of which are HDCP 2.2 equipped, are to the rear of this feature-laden unit - where you'll also find digital coaxial and two digital optical connections.

In terms of output, the AVR-X2500H is (like its predecessor) nominally a 7.2 channel amplifier, with two of those channels assignable either to surround back or height speakers.

Denon has been vocal in its commitment to providing as full a range of technologies as possible to customers at every price point, and the AVR-X2500H is one of the company’s most heavily tooled £500ish offerings yet.

Its feature list includes Dolby Atmos, DTS:X and DTS Virtual:X audio codecs alongside video technologies such as Dolby Vision, HDR, HLG and, of course, 4K video upscaling. Part of the HEOS multi-room range, the AVR-X2500H will also stream music from Spotify, Amazon, Tidal and Deezer in unison with any similarly able products around the house.

In line with the rest of the HEOS range, you can now also control your home cinema amp hands-free, via Amazon Alexa. Having misplaced many remotes over the years, we find the ability to adjust volume and source selection through voice control a handy addition – and very much on trend.

After a good time running in – our sample was running for ten days before we made a start – and a swift set-up via the built-in Audyssey MultEQ XT software, this Denon sings with remarkable fervour.

Even if you assume its original £549 retail price, the Denon waltzes off with five stars.

Its ability to handle everything well, rather than just competing with its rivals, marks it out as something special.

It is immediately clear Denon has taken a step forward over the past year. Most notably is the AVR-X2500H’s increased power over its predecessor, bringing it closer to the more muscular character of Denons past.

Using the 4K disc of David Ayer’s WWII film Fury as an example, the weight of artillery fire and tank tread through heavy terrain now rumbles around our test room with increased authority. Our bones rattle as bombs are dropped and there is thunder as the destruction continues in the distance.

A tiny amount of delicacy is sacrificed compared to the last generation, but the increase in muscularity is a worthwhile swap.

Because the AVR-X2500H remains an all-rounder. It is more balanced, more detailed and more dynamic than most of its competitors, staying taut and insightful when so easily it could become loutish.

Attention has clearly been paid to retaining Denon’s careful handling of dialogue, reflecting the ire, intensity and despair of the Fury cast while keeping careful watch on timbre and texture.

That detail and expression is important across the spectrum, and it’s important to note the AVR-X2500H’s considerable low-end presence is not without sonic analysis and insight.

This amplifier is in keeping with the brand’s long-standing character and its refined, full-bodied identity. This performance retains confidence and even-handed tone throughout the register, regardless of its source material.

The closest competition comes in the form of the Sony STR-DN1080, a multiple What Hi-Fi? Award winner.

Though it is difficult to imagine a more detailed or expressive home cinema amp than the Sony being built for the money any time soon, it and this Denon have differing talents, and are likely to appeal to different audiences.

What’s particularly noticeable about the STR-DN1080 is the life it breathes into a soundtrack. It's a barometer for intensity and anticipation, which elevates it above so much of the market.

But it cannot compete with its rival's major strength: the knockout blow the Denon harnesses. Without foregoing its own impressive levels of detail, timing and dynamics, the Denon can pin us in our seats during scenes of extreme action.

The ability to continuously improve a range of multi-Award-winning home cinema amps is one that truly sets Denon apart – and once again the company has demonstrated its mettle.

The AVR-X2500H builds upon its predecessor’s all-round excellence and puts extra muscle on its bones.

Combine this with a comprehensive feature list, which is still growing as new technologies arrive, and you have another sterling product that will prove the go-to for anyone with £500 or so to spend.