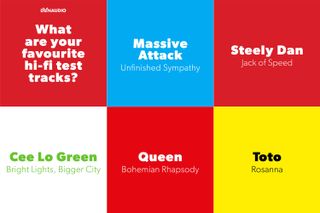 You wouldn’t buy a car without taking it for a test drive. Neither should you buy a hi-fi without putting it through its paces.

But what are the songs that really give your speakers a thorough workout? The tracks that test the bass, midrange and treble? The tunes that ask serious questions of a system’s ability to produce a convincing, natural soundstage, and check timing is delivered with toe-tapping precision?

To celebrate the launch of Music, Dynaudio’s new range of intelligent wireless music systems, we asked what songs you use to give a hi-fi a proper workout. Hundreds of you had your say on Facebook, so we tallied up the results and came up with a top 20, which we then put to vote on Twitter.

And here, in reverse order of popularity, are the results…

There’s nothing like four bars of unadulterated and expertly recorded drums to put a speaker system through its paces. Better yet if said drums are followed up by chiming chords thumped out on the cleanest of guitars. Throw in a little fuzz bass and you have Black and White Town by Doves, a sing-along-anthem with all the multi-instrumental sparkle needed to test the clarity of your hi-fi.

A surprising entry at 19, Sadness by Enigma is an early ‘90s dance classic that mixes Gregorian chants with tight electronic beats and a swathe of swirling synths. Lesser systems can make the kick sound overblown and flubby, making it a great test for the dynamism and control of your woofers.

17. Michael Jackson - Man in the Mirror

There’s only one MJ track in your top 20, but what a track. Man in the Mirror, from 1987’s Bad, features an exemplary vocal performance backed by the lightest of synths and the sharp click of snapped fingers. Throw in some classic ‘90s bass and one heck of a key change and you have a track perfectly poised to test the precision and timing of your hi-fi setup.

Doves’ second entry into the top 20 is a more relaxed affair than Black and White Town, but no less taxing on your speakers. Firesuite builds from a subtle growl into a majestic mix of hammond organs, swirling guitars, and sampled vocals that sounds every bit as complex as its canny title suggests.

Now we’re talking. Child in Time, taken from 1970’s Deep Purple in Rock, sees Deep Purple at its progressive best with an epic rock track that runs over 10 minutes long. While not all that complex musically - for the most part it’s based around a simple three-chord structure - Deep Purple creates interest by varying tempos, introducing organs and letting Richie Blackmore run riot with a two-minute face-melting guitar solo. If your hi-fi is up to the task, this is a song to get lost in.

From one prog classic to another, Emerson, Lake & Palmer’s Jerusalem opens 1973’s Brain Salad Surgery in a spectacularly overblown fashion. With church organs, the debut of the first polyphonic synthesiser in history (the Moog Apollo) and as many drum fills as could possibly be crammed into a song less than three minutes long, it’s every bit as complex as you’d expect from the masters of prog rock.

After almost three years of spectacularly unproductive studio time, Scottish band The Blue Nile relocated to its home town of Glasgow and went back to basics for the brilliant 1989 album Hats. Your pick, Let’s Go Out Tonight, is a forlorn song of arpeggiated guitar lines and a glorious vocal that soars above a laid back rhythm section. Systems with poor midrange chops won’t do the vocals justice.

A classic slice of ‘70s psychedelia, The Doors’ Riders on the Storm has long been used to demonstrate the wide soundstage of good hi-fi setups. Rain, thunder, a Fender Rhodes piano and Jim Morrison’s haunting vocals create an expansive atmosphere that envelops the listener.

Telegraph Road, the first of three entries in the top 20 for Dire Straits, is a 14 minute epic that builds from subtle acoustic guitars, piano and synth into a gloriously grandiose rock ballad. Brilliant guitar work by Mark Knopfler, not to mention the odd organ or two, make this a compelling hi-fi workout.

Whether you opt to listen to the original “Q sound” recording - a 3D sound processing algorithm designed to simulate surround sound - or the remastered 5.1 surround SACD mix, Roger Waters’ Amused to Death is one the best ways to test your hi-fi’s positional performance. That recent events have made it sound so contemporary, despite being originally released in 1992, is just the icing on the cake.

Proving that an acoustic guitar can crank out as memorable a riff as any electric, Tracey Chapman’s Fast Car is an enduring song that sounds just as fresh now as it did on release nearly three decades ago. Her mesmerising vocal performance is a fine test of your hi-fi’s midrange prowess. A great system really will make it sound like she’s in the room there with you.

Mark Knopfler of Dire Straits fame channels the deep south for the delta blues-inspired Privateering. Though largely based around a haunting acoustic guitar riff, the song eventually gives way to a to the bold sound of a band for just four bars before dropping back to Knopfler’s acoustic. This is a great song for testing the dynamic range of your hi-fi.

As one of the most forward-thinking, influential hip-hop albums of all time, the Beastie Boys’ 1989 album Paul's Boutique is filled with classics. But when it comes to testing your hi-fi, nothing is better than the bass fuelled onslaught of Hello Brooklyn, a hard-hitting track where the lowest of lows rattle the windows and shake the walls.

Does this song really need an introduction? Bohemian Rhapsody is six minutes of soaring harmonies, delicate piano and Freddie Mercury’s powerful vocals. Throw in an always unique Brian May guitar solo and you have a bonafide rock classic perfect for blasting out of your hi-fi at maximum volume. Headbanging is mandatory.

Time for some Mancunian swagger with The Stone Roses’ Fools Good, a 1989 indie classic that expertly merged acid house and rock era with its big-beat drums and grooving bass line. Still as funky fresh as the day it was released, Fools Gold - produced by the legendary John Leckie - is a hi-fi workout that’s as much about making sure your system sound fun as it does accurate.

As famous for its bleak lyrical takedown of the American dream as it is its smart production—listen out for the lower-than-usual tuning of the snare drum that makes space for other instruments—Eagles’ Hotel California is an unforgettable piece of late ‘70s rock. Hold out for the subline harmonised guitar solos towards the end of the song and wonder what could have been if the rock'n'roll lifestyle hadn't taken its toll by the time Eagles broke up in 1980.

A surprisingly high entry for American rock act Evanescence, My Immortal is a piano-led ballad that spans the whole gamut of rock cliches. It’s saved by a haunting vocal performance from lead singer Amy Lee, who—to use a classic audiophile cliche—sounds like she’s right there in the room with you on a well-balanced hi-fi.

Beginning with 30-seconds of uninterrupted 1980s synth, Dire Straits’ Private Investigations is an unusual ballad featuring one of the most tasteful guitar players of a generation. Mark Knopfler’s subtle nylon-string melodies are a taxing test for any hi-fi system, particularly when set against a dense backing of synth, bass and piano. It helps, too, that Private Investigations is a fabulous song from a fabulous album.

1. Dire Straits - The Man's Too Strong

With four entries in the top 20, it’s clear What Hi-Fi? readers are especially fond of Mark Knopfler’s enduring Dire Straits. In the number one spot is The Man's Too Strong, taken from the immensely popular album "Brothers in Arms". Delta blues slide sits atop a dense backing of acoustic guitar, bass and piano that, with the right system, sounds huge. There’s a wide dynamic range, too, particularly compared to the brick wall limiting typical of modern music, which pushes a system to its limits.

To find out more about the Dynaudio Music family, click here.