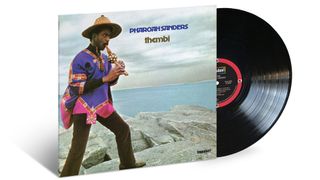 Jazz is a divisive art-form. For those who are partial, it's America's single largest contribution to 20th century music and popular culture. For those less convinced, it can often sound like it's being made up on the spot – a textbook 'I could have done that' form of art.

But regardless of whether or not you know your Basie from your Bird, there's no denying the hi-fi potency of some of the best jazz recordings. That's why we've selected these dozen pieces.

They all have plenty to tell you about the way your system is performing. And with any luck they'll bring (at least some) jazz onto your radar if it's not there already.

To start sampling these tunes right away, we’ve put together a playlist on each of our favourite music streaming services:

Renowned drummer and notorious musical risk-taker Cobham is, naturally, the engine-room here – but the overall balance of Stratus is perfect for testing the way your system approaches a fiercely complicated recording.

Drums, percussion, keyboards (acoustic and electric piano, plus Moog synthesizer), acoustic and electric bass, horns and wind instruments all take a turn – and when they’re all chipping in simultaneously (as they do from 5:15) your system will need to demonstrate all its powers of resolution to keep this virtuoso fist-fight in check.

There’s no mistaking a Monk recording – his utterly unique improvisational style is without peer. His work is at its most questioning when tackling a classic like this, where the combination of stabbing attack, unpredictable note releases and hesitations makes for fascinating (if not always the most relaxing) listening.

This solo piano piece is alive with tiny details in its oddball key releases, periodic silences and glissandos – the attacks and decays are unique to Monk, but if your set-up can’t dish the details he’ll end up sounding more like Les Dawson.

Like the majority of these recordings, Return to Forever is an ensemble piece. But it’s Corea’s staggeringly lyrical electric piano playing that steals centre stage, and consequently (along with percussionist Flora Purim’s wordless vocal interjections) the midrange.

The remarkable discipline of Corea’s playing means he sounds fluent and expressive even as each stab or caress of his keyboard is delivered squarely – so it follows your system needs to be able to deliver all the warmth and wit loaded into the midrange to hear him to best advantage. Plus it needs to put enough space around the keyboard sounds as they compete for space with voice, flute, drum kit and double-jointed bass.

Schoolhouse Rock! is a series of cartoons that appeared on Saturday morning U.S. television from the 1970s to the 1990s – Bob Dorough composed and performed many of the songs from the series. Here he’s helping viewers learn their multiplication tables.

As a test of your set-up’s ability to establish a sense of space (in a performance that features multiple elements) Three is a Magic Number is among the best around. Every instrument and voice should exist in its own space on the soundstage, related to but not overlapping the other elements of the recording. Sometimes the emptiness is just as important to a recording as the sounds, and that’s indubitably the case here.

On September 15th 1963, the Ku Klux Klan killed four African-American girls by bombing the 16th Street Baptist Church in Birmingham, Alabama. John Coltrane’s lament/eulogy/rebuttal of the event is one of the most aching, resolute and indomitable pieces of music you’ll ever hear.

And in terms of its impact, timing is everything – your system must describe the interplay between the musicians (and the horror that’s all-but audible in Coltrane’s playing) to give the piece its full weight of import.

Kirk was a test of dynamism all by himself – after all, not too many horn specialists routinely play three instruments at a time. And when surrounded by an extensive ensemble all gathered to celebrate the black notes of the keyboard, he becomes among the most frantic examinations of your system’s dynamic ability you’ll hear.

Blacknuss starts quietly, gets louder, gets louder still – and then fluctuates between those states for as long as it feels like it. Can your system keep up? No? Time to start auditioning new components.

Ethiopia’s leading percussionist and vibes-player is still going strong at the age of 74. And while he was virtually unknown outside his homeland during the 1970s (when he was at his most inspired and productive), the 21st century has seen a big upturn in his popularity and, consequently, his fortunes.

If you can think of a recording better suited to test your set-up’s understanding of and facility for rhythm than this beautifully realized combination of African inflection, Latin tempo and time-signature, and jazz interplay, by all means let us know.

Jaco Pastorius – Come On, Come Over

It wouldn’t be overstatement to call Jaco Pastorius a game-changer when it comes to jazz bass. He virtually single-handedly made electric bass an acceptable jazz instrument, and played it like a well-schooled demon (his double-jointed thumbs helped, no doubt).

On Come On, Come Over he takes his instrument for exercises of all kinds. Your set-up’s low-end fidelity has to extend to speed, tonality and speed again if Jaco’s virtuosic showing-off is to be heard to best advantage.

It’s one thing to establish a soundstage of guitar/bass/drums/voice and have your system describe it convincingly. It’s quite another to populate your stage with koto flute, balaphone, saxophone, finger cymbals, alto flute and cow horn (along with all the more usual jazz ensemble instruments) and assume your set-up will be able to make sense of it.

If Astral Traveling is to sit believably between your speakers, your system will have to make each gentle, undemonstrative element co-exist harmoniously – after all, what’s worse than your claves impacting on your violin?

Where understatement and low-temperature swing are concerned, few performers percolated like Mose John Allison. His combination of blues and jazz was never more fully realised than on Everybody Cryin’ Mercy – but as far as your electronics are concerned, it’s all about the soft attacks and lengthy delays Allison puts on his piano (as well as the similarly laid-back approach of his drummer and bassist).

Without proper description of the leading edge of notes (and their lingering departure), a ton of the tune’s sardonic humour is lost.

A collective like Art Ensemble of Chicago, with the many and various instruments they deploy (a 1969 tour of Europe saw them use over 500, including ‘little instruments’ like bicycle bells and wind chimes), would be difficult enough to organise at the best of times. Theme de Yo Yo is emphatically not the best of times, featuring as it does several episodes where the band are seemingly pushed down the stairs while tape is rolling, only to emerge still playing at the bottom.

If your hi-fi system can keep track of all the different instrumental strands as they career past the microphone, its powers of organisation are to be applauded.

The intensity of Alice Coltrane’s reworking of A Love Supreme is an examination of every part of a system’s frequency range reproduction (as well as of the listener’s heart and mind), but it’s in the treble that this tune is able to separate the masters from the pretenders.

The shaken percussion, grinding organ inputs and harp chromatics all work your set-up’s top end – there needs to be smoothness, but not blandness, to all these sounds. And that’s before Frank Lowe’s squealing sax begins its impression of some enraged geese at around 4:59.