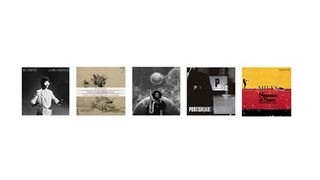 Though she's always described as an avant-garde artist, Laurie Anderson's training initially focused on sculpting and violin - but 'pop' musical, visual art and performance art all fall within her singular compass.

Quite aside from the spacious hand-claps, wood-block hits and marimba strikes (which all must happen with speed and control, and in their own distinct space), it's one of Anderson's unique innovations that makes Born, Never Asked into a particularly tough test of the alacrity of your set-up's high-frequency response. Her keening violin thoroughly examines your system's speed of treble - it's an instrument of her own design, featuring magnetic tape on the bow (rather than the more usual horsehair) and a magnetic tape head in the bridge.

Rapidity and discipline are required if the piece is to remain as four-square and regimented as its composer intended.

The Durutti Column Sketch for a Summer

In some ways Keith Jarrett is the perfect pianist to wrangle Samuel Barber's volatile Piano Concerto op38 - his playing is as strident and stentorian, or as delicately understated, as the piece itself. And there are numerous opportunities during these turbulent 12 minutes for your system to demonstrate its adroitness (or otherwise) when it comes to describing the decay of the copious high-frequency signals bursting from the piece.

The dynamism of Jarrett's playing (particularly in the upper registers) is testing enough by itself - his stabs at his instrument's keyboard shouldn't overstay their welcome, though neither should they dissipate ahead of time. And that's before you factor in the treble inputs of an enraged string section, the blaring brass or the explosive percussion punctuation. There are many ways your set-up can be exposed by this piece - but if those short wave-forms are described in full, it's even easier to be swept away by its potency and power.

John Cage is, unfairly but inevitably, most closely associated with his 1952 composition 4'33", which is performed in the absence of deliberate sound. But his achievements as a fearless avant-garde composer and theorist extend well beyond the the thick end of five minute's-worth of non-participation by musicians.

Some of his more fundamental ideas of indeterminant and aleatoric music are demonstrated in Quartet 1 (Moderate) - and, as an examination of your system's high-frequency extension, it's as useful as it is challenging. Built exclusively from percussive hits, clangs, strikes and clonks, it not only tests your set-up's ability to reach up towards the limits of human hearing but also your hearing's ability to tolerate unpredictable repetition for five minutes at a time.

By the time Sketches of Spain was released in 1960, Miles Davis was in the process of establishing himself as a musician for whom no territory was unchartable. His performance (and Gil Evans' arrangement, which cannot be understated) of Joaquín Rodrigo's Concierto de Aranjeuz fuses jazz and European classical styles more successfully, and more satisfyingly, than any attempt before or since.

But despite Davis asserting the melody of Concierto de Aranjeuz is "so strong... the softer you play it, the stronger it gets", it's the more abandoned moments of this recording that will shine a spotlight or your system's ability (or otherwise) to attack the higher frequencies. Between flugelhorn, trumpet, castanets and percussive shakers of all descriptions, your set-up has its work cut out to communicate the relentless drive and momentum of the musicians. If it can't, moments that should thrill with their treble attack will sound more like the box of tambourines being taken down from the primary-school cupboard.

1973's Faust IV was the legendary/notorious band's final release for over 20 years - and it's a measure of just how challengingly 'other' Faust's output was that, at the time, fans derided The Sad Skinhead as depressingly conventional and song-like.

For our purposes, though, it's a tune that examines the smoothness of your set-up's high-frequency character like little else. Although quite disciplined by Faust's sprawling standards, by any conventional measure it's a bit of an oddball - the yelling, the percussive shakers, the shrill guitar and fleeting keyboard inputs, the primitive marimba phrases are all, it seems, recorded in the red. So unless you prefer your system to sound as abrasive as exposed fuse-wire, it'll need to keep all these competing treble eruptions on the right side of 'ear-splitting'.

Julian Cope Hung Up and Hanging Out to Dry

The Go! Team Doing It Right

According to his obituary in the New York Times, Yusef Lateef played world music "before world music had a name". Certainly his fondness for, and mastery of, instruments as esoteric as the bamboo flute, shofar and koto, gives an indication of the scope of his interests and ambitions.

The restless jazz-funk of Bishop School has a mixture of treble-frequency activity, from tambourine and drumkit percussion, through string and brass sections, to the flute inputs of Lateef himself. And it's this playing, by turns soft and warm, shrill and urgent, that really examines your system's dynamic headroom at the top of the frequency range. Can it manage that shift from cossetting to cacophonous? No? Time to look for something a bit more capable.

Darker and more disturbed/disturbing than debut album Dummy, Portishead's eponymous second album would be happier on the mortuary slab than the coffee table. Which, one must assume, is exactly how the band wanted it.

The treble elements of Humming aren't all that numerous, but each is a stern test of your system's top-end refinement. That undercurrent of vinyl surface noise (plus some scratching), the hi-hat that sounds like the mic is a nanometre from the cymbal itself, the keyboard-derived theremin sound, the sibilants in Beth Gibbons' vocal, what sounds like someone attempting to tune a long-wave radio - each has the potential to veer into unpleasant and unwanted coarseness. How well your set-up controls them will impact significantly on the tune's tension.

The first non-Jamaican band to win a Grammy award for 'Best Reggae Album' (1985's Babylon the Bandit), Brummie heroes Steel Pulse started as they meant to go on with their debut album - and this, the title track and album opener, is a tremendously thorough exploration of your set-up's prowess where treble agility is concerned.

The rolling percussion so essential to the skank of reggae's inverted two/four off-beat rhythm is a brilliant test of your system's ability to flow easily and without the club-footed lumpiness that reggae in particular is able to provoke. Handled properly, the upper frequencies in this tune are just as capable a bringing forth a loping head-nod as the more celebrated bass sounds.

Steely Dan - Do It Again

Steely Dan's debut album became hard hi-fi currency almost immediately upon its November 1972 release - and its cachet wasn't harmed at all by a quadrophonic mix released alongside the stereo version. In the intervening decades, the band has become a byword for grown-up, painstaking and refined sound. Which makes them a perfect candidate for showcasing your system's strengths, no matter what they are.

Here, though, we're concerned with treble - and the first minute of the first song on that first album is enough to separate the high-frequency masters from the mere workmen. Congas, ride cymbal, electric piano and guiro all compete for space in more-or-less the same section of the frequency range, and all produce entirely different sounds and textures. A quick burst of electric guitar and finger-cymbal further muddies the waters - and the vocal hasn't even started yet. If your system can differentiate these rival sounds effectively, the high-gloss Steely Dan sound is all the more welcoming.

The Magnetic Fields You Must Be Out of Your Mind

It takes an uncommon sort of confidence to title one's debut album The Epic and have it run to very nearly three hours long. But if there's one thing Kamasi Washington has - besides staggering virtuosity and an otherwordly feel for the nuances of his instrument, I mean - it's confidence. After all, few are the individuals who might not balk at the idea of taking on Claude Debussy's deathless Clair de Lune, let alone retool it as a gospel-inflected jazz/classical mash-up. Fewer still would emerge, as Washington does, victorious.

There's just a ton of stuff going on here, and it doesn't relent for a moment. Between the intro and outro of (exquisitely recorded) solo piano, the upper end of the frequency range gets an examination worthy of a Master's degree. Organisation, attack, refinement, fidelity... every discipline comes under the spotlight from brass instruments, from voices, from strings and from percussion. Done badly, this is 11 minutes-plus of splashy mess.

Funkadelic Free Your Mind and Your Ass Will Follow