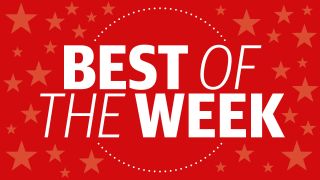 Strange times are these in which we live. Indeed it has been an odd week as many of us adjust to home working, limited time outside and social distancing. But hey, at least we (well, most of us) have time to catch up on TV shows and movies that we have fallen behind on.

Hi-fi brands and entertainment services are chipping in with deals and workarounds aplenty, and the UK and European arrival of Disney Plus couldn't have come at a better time. We at What Hi-Fi? are doing what little we can to disseminate such offers and make suggestions of excellent content to fill your time, with our best efforts as follows...

Disney Plus finally arrived in the UK and (a lot of) Europe this week, so naturally we have been stuck to our tellyboxes (because what else is there to do at the moment, right?)

We concluded in our five-star Disney Plus review that the Netflix rival is "a well-stocked, easy-to-navigate catalogue of new and original content that Disney fans are bound to enjoy". And we have put together a list of recommendations for the best shows and films to watch on Disney Plus, too, including plenty of 4K HDR titles.

Samsung's QE65Q95T is its top-tier 4K QLED TV for 2020, and it's a corker - albeit somewhat not the one we were expecting. In choosing to focus even more on 8K TVs this year, Samsung has positioned this set as a replacement for its near-flagship rather than flagship from 2019. And that means it is some ways a downgrade on last year’s top Q90R 4K model (in terms of fewer dimming zones, for example). Still, despite this the QE65Q95T is an improvement on last year's flagship in practically every way, not to mention the fact it carries a cheaper launch price. It's an excellent TV in its own right, and bodes very well indeed for 2020 TVs in general.

For less than the price of a beer, those who haven't signed up to our favourite music streaming service can have four months of any plan (including the Tidal Premium Family tier for up to five members) for just a one-off fee of £4 / $4. Considering the priciest plan is usually £30/$30 per month, this springtime deal offers some serious savings.

Read in full: Sing up to Tidal's streaming deal of the year (UK / US)

Getting bored in your, in the words of Bob Mortimer's Train Guy, isolation inspiration station? We know, us too. But to help alleviate some of that boredom, we have some good self-isolation-related reads for you, including 9 brilliant albums recorded in self-isolation and 10 of the best live music streams and virtual concerts to watch.

If you are a subscriber of plenty of video services but don't have the foggiest what to watch, we have also procured plenty of recommendations for the best TV shows and movies to watch, which you can find over on our features page.

Trial hi-fi at home... for free

Cyrus and Melco have this week announced try-before-you-buy schemes that allow you to audition a number of their products from the comfort of your home for free.

Products available for home trialling span Cyrus' One, One HD and One Cast amplifiers (with or without speakers), and the One linear speaker system, and a number of Melco's digital music libraries including the Melco EX Series and S100 data switch.

Full information on how to request kit in the links below.

Read in full: You can now home trial Cyrus One Series products for free

John Lewis is offering plenty of unmissable clearance sale deals, the stand-outs of which for anyone needing a new pair of wireless sport or running headphones is 30 per cent off the five-star Bowers & Wilkins PI3 earbuds, and more than a £100 saving on the ever-popular Beats Powerbeats3 Wireless in-ears.

Read in full: Beats Powerbeats3 wireless earbuds down to just £79

Read all the latest reviews

Read all the latest news

Read all the latest advice and features

Best TV deals on the internet

Best headphone deals on the internet