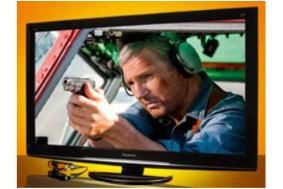 2D-3D conversion for both still images and video is a function that has been embraced by rival 3D manufacturers Samsung and Sony, but which Panasonic has until now refused to implement.

Indeed, Panasonic's senior vice president, Bob Perry, once said there'd be no conversion in Panasonic's 3D screens, so this appears to be a change of heart by the Japanese brand.

It may also anger early adopters of Panasonic's V Series 3D plasmas, as these models now miss a feature that may still become key in the future.