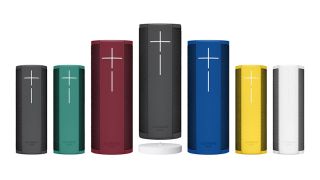 Hot on the heels of the new Sonos One smart speaker, Ultimate Ears has released its own pair of Alexa-powered speakers: Blast and Megablast.

Based on the existing Boom 2 and Megaboom speakers, the new speakers retain their portability, 360-degree sound design and rugged, waterproof build quality.

With Amazon's Alexa personal assistant and wi-fi built in, you can control your music, as well as elements of your smart home, using simple voice commands.

You can stream songs via Bluetooth, too.

While the Blast mirrors the existing Boom 2's configuration, the Megablast has been redesigned with new active drivers, tweeters and passive radiators to give it a sonic lift. Ultimate Ears says Megablast is its loudest speaker yet, measuring a maximum of 93dB and being 40% louder than the Megaboom. It's bigger in size, too.

A new optional charging dock, called Power Up, is also available for £35.

The Ultimate Ears Blast and Megablast cost £200 and £270 respectively, and are available to buy from 26th October from Ultimate Ears, and from other retailers soon afterwards.

How to use Amazon Alexa to control your music