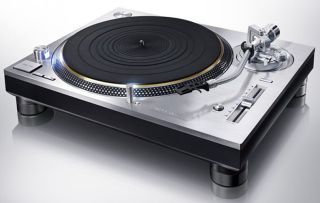 The Technics SL-1200G turntable is now on sale, following the limited release of the special edition SL-1200GAE (which sold out in minutes).

Originally rumoured to cost £2799, the turntable is priced at £2999 (Sevenoaks, Richer Sounds), that slight increase possibly due to the recent drop in value of the pound sterling.

Ever since the return of the Technics brand in 2014, a new Technics deck seemed inevitable and the good news was confirmed in 2015, when Technics revealed a prototype turntable at the IFA show in Berlin. The finished article broke cover at CES 2016.

Speaking to What Hi-Fi? earlier in the year, Technics CTO, Tetsuya Itani, explained the that the new deck was a complete redesign, requiring a brand new manufacturing process, using all new tools - and this made for an expensive turntable.

"Because the original 1210 turntables were manufactured for so many years, the manufacturing process had got to a very low cost. Now we need to invest in all the tools again, and the price now is much higher than the 1970s."

And that means it's a whole new Technics deck. “Everything is new… except for the dust cover," said Itani. "The weight of the platter is nearly three times the old '1200, and we also have a new motor, which is a very important point of the new model. The feet too. It’s heavy, the old 1200 was more plastic.

“Every part is designed for better sound quality. We are thinking of course it is a 1210…. but performance wise it’s SP10 MKII level.” The Technics SP10 MK II was an expensive, heavy duty hi-fi turntable that launched in the mid-1970s.

Now you can find out just how good it sounds, provided you have a few grand going spare...