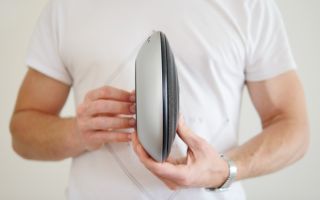 A Kickstarter campaign is now live, with Studio Proper aiming to attract $40,000 worth of pledges before 10th December. If successful, it'll allow the company begin mass production of the speaker.

Studio Proper says the Proper Audio 2 comes in response to the demand for a speaker that offers the flexibility of a portable wireless device and the sound quality of larger, permanent speakers.

Proper Audio 2 can be taken with you, but it can also be mounted to a wall if you want a more permanent solution. The M Lock mount disks use a residue-free 3M adhesive for ease of use.

The speaker can be used with a wide range of Bluetooth-compatible devices – including Android and Blackberry. Meanwhile, its battery is claimed to deliver eight hours of use from one charge.

And it's also said to be the "world's first magnetic iPhone speaker mount", making use of four high powered neodymium magnets to keep your iPhone 4-6 Plus in place, even when wall-mounted.

Under its cover, a 80mm passive bass radiator is used to generate low end audio without draining the battery. The unit also houses a 60mm titanium cone driver and 38mm high pass tweeter.

A 3.5mm auxiliary port is provided for wired connections, with the speaker measuring 200 x 200 x 55m and weighing in at 1100g. It's hoped that mass production will commence in March 2015.

Early bird supporters of the Kickstarter campaign can get a Proper Audio 2, wall-mount disk, Micro USB charger and auxiliary cable for $89 – saving 25 per cent on the recommended retail price.