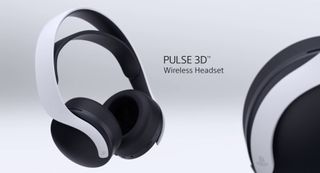 Sony's recent PlayStation 5 reveal event attracted seven million online viewers, and, to those who waited patiently right until the end, it delivered the first tantalising shots of a new wireless headset accessory.

The Pulse 3D wireless gaming headset looks to be the successor to the excellent PlayStation Platinum Wireless Headset, and will likely showcase the all-new 3D audio technology built into its PS5 consoles (yes, there's more than one) and DualSense controller.

The headset joins the consoles and the redesigned camera and media remote accessories as part of the all-new arctic white monochrome PlayStation family.

Information regarding the new headgear was decidedly limited at the reveal, but we do know they will be wireless and will support Sony's proprietary 3D audio proposition...

Not only will the PS5 offer 4K HDR gaming as standard, it will also have 3D audio – but it seems likely that to enjoy it you'll need headphones. Enter the Pulse 3D wireless headset, which Sony says will be available at launch, we expect as an optional extra. It seems unlikely that the Pulse 3D wireless headset will come bundled, either with the full-fat 4K Blu-ray-playing PS5 console or the downloads-only 'Digital' edition.

From what we’ve seen and heard of the new games, the Pulse 3D could be an invaluable accessory.

PlayStation’s Mark Cerny said earlier this year, “The first goal was great audio for everyone, not just VR users or soundbar owners or headphone users. The second goal was to support hundreds of sound sources. We didn’t want developers to have to pick and choose what sounds would get 3D effects, and which wouldn’t. We wanted every sound in the game to have dimensionality.”

While the PS5 might support Dolby Atmos, particularly for movies and TV shows, for gaming the focus is clearly on a new, bespoke, object-based 3D audio technology that Sony calls Tempest.

Sony has taken the decision to focus on headphones for its 3D audio in order to make implementation "more straightforward", but there will be a virtual surround sound mode for soundbars and home cinema systems, too – although while B&O joined forces with Microsoft to create an "audio proposition" for the Xbox Series X, Sony has not announced any similar audio brand collaborations regarding the PS5.

As with the console and other accessories, there's no official word on pricing yet. The PlayStation 4 Platinum Wireless headset launched at £130/$160 (not exactly budget in the gaming headset sphere), and it seems likely that the Pulse 3D headset will be at least as expensive.

Twitter user @IronManPS5 claims to have intel on pricing though, tweeting that the Pulse 3D Wireless will set you back £129 / $159 (about AU$229). If true, that could make it the most expensive PS5 accessory in the new line-up.

When Sony breaks its silence over pricing and further features, you'll be the first to know. For now, there's plenty to get excited about...