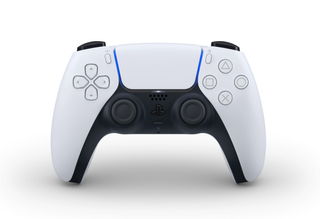 Behold! Feast your eyes on the first images of the PS5 DualSense, the new wireless controller for Sony's upcoming PlayStation 5 console.

While we've no official update on an exact launch date for the hotly-anticipated Sony PS5, Twitter user @IronManPS5 thinks it'll arrive on 20th November (meaning we're still on for a Holiday 2020 release, although games might be delayed) and while that's leaked information, so should be treated with caution, we do have plenty of actual juicy Sony images to feast our eyes upon.

Heighten Your SensesSony Interactive Entertainment will launch DualSense in several countries in the holiday season of 2020 and will make DualSense available in North America and Europe on November 20, 2020 at a recommended retail price (RRP) of US$59.99, €59.99 and £54.99 pic.twitter.com/YyEPd2XjcLJune 18, 2020

Sony revealed on its PlayStation Blog that the controller is "starting to ship in its final design to developers who are implementing its unique features into their games."

Sony continues with a promise that the new controller "will captivate more of your senses as you interact with the virtual worlds in PS5 games. The features of DualSense, along with PS5’s Tempest 3D AudioTech, will deliver a new feeling of immersion to players."

Sony has wisely decided to keep much of what gamers liked about the DualSense's predecessor (the DualShock 4) intact, while adding new functions and refining the design. The big focus has been on what Sony calls a "sense of touch within gameplay". Using haptic feedback, the wireless controller will now allow you to feel different sensations when you play, such as the slow grittiness of driving a car through mud.

To fit some of these new components, the style and shape of the new controller has been tweaked. The angle of the hand triggers has been changed, while the grip has been updated too. Sony wants to make the controller feel light and small even with the added features.

In terms of buttons, compared to a DualShock 4 controller, there is no longer a 'Share' button, but don’t worry, it's been replaced by a new 'Create' button. With Create, players should be able do just that – create gameplay content to either share or just to enjoy for themselves. More details on this feature are promised closer to launch.

DualSense also includes a built-in microphone array, which will enable players to chat to friends without a gaming headset.

Sony's press release mentions it's tried to "maintain a strong battery life" for the PS5 DualSense, but doesn't reveal how long you can expect to get from a single charge.

Regarding the colour scheme, Sony has deviated from its traditional single colour design and gone for a two-toned aesthetic. The position of the light bar is also different: on DualShock 4, it sat on the top of the controller and now it sits at each side of the touchpad. Sony thinks it gives the whole thing "extra pop" and at first glance, we'd have to agree.

We do know that this is your new PS5 controller in its final form. What do you think? Let us know with a comment below and stay tuned to whathifi.com for further PS5 news including a definitive launch date, as and when we get it.