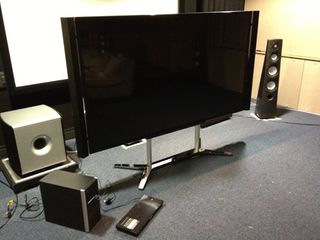 Sony has told Inside CI that it has no plans to bring its 4K media server and film distribution service to the UK or Europe. Sony is sticking to its official line that "there are no such plans for Europe at this stage. It's a US-only thing".

So UK customers won't get a selection of 4K films pre-loaded on a hard-disc media server for full Ultra HD playback.

But the firm is still committed to the rollout of its new Ultra HD TVs, as revealed at CES 2013 earlier this month. It will focus on 4K upscaling technology and will brand a host of Blu-ray titles as 'Mastered in 4K'.

Sony's £25,000 84in flagship 4K LCD screen, the KD-84X9005, will be joined by 55in and 65in models later this year. The so-called X9000A range uses the latest Sony 4K X-Reality Pro and X-Reality Pro processing engines, to deliver 4K content and upscaled Full HD content on the 4K screens.