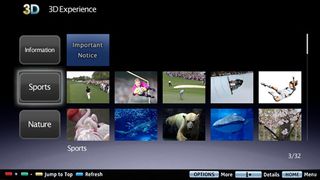 Sony is following in the footsteps of Samsung by offering owners of its 3D TVs a free on-demand streaming service with a selection of video clips and trial content in 3D, including highlights of Wimbledon 2011.

The latter will be available on 3D-capable Sony LCD TVs with Bravia Internet Video, and the service will be expanded to include Sony's 3D-capable Blu-ray players and Blu-ray home cinema systems in due course.

Sony's 3D Experience will initially be available in the UK, Germany, France, the US and Canada.