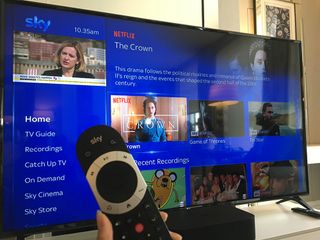 Sky Q customers will be able to watch high dynamic range content through their set-top box from tomorrow (Wednesday 27th May).

Customers will simply need a Sky Q box* with a Sky Q experience or Ultra HD subscription, as well as a TV that supports the broadcast-friendly HLG HDR format. They will be automatically set up to view HDR from tomorrow, with no update or settings amendments required.

Sky Nature itself is a new, free channel that's available to all Sky TV customers, and the aforementioned on-demand shows released with it represent the first HDR content available to watch on Sky Q.

An update to bring HDR video to Sky was first mooted back in February 2017, but that upgrade has faced several delays. Just before Christmas, a Sky employee confirmed that the long-rumoured HDR update wouldn't arrive until late this year at the earliest.

Sky says that its Sky Nature programming "has been selected to launch HDR as it has a vast array of landscapes, settings and colours suited to HDR". That's fair enough; from past BBC, Disney and Netflix shows we know the virtue of HDR for nature documentaries.

But what about HDR titles from the Netflix and Disney+ apps on Sky Q? Sky has confirmed that HDR support will also launch on third-party apps over the "coming months". Sky is due to support Disney+'s 4K content in the summer, so HDR support for the app - and others - could well arrive at the same time.

Sky is promising much more HDR content throughout this year and next, too, with more Sky Nature shows as well as Sky Originals and, in time for Christmas, a selection of the blockbuster movies on Sky Cinema. Next summer, live HDR broadcasts are planned to kickstart with the 2021 Summer Olympics.

It's worth pointing out that BT Sport has supported live HDR for ages already, broadcasting most of its Premier League football in the format via third-party devices such as smartphones and the Apple TV.

*From Wednesday 27th, Sky Help will detail which boxes are compatible.