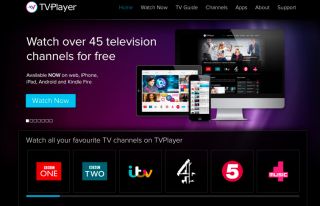 TVPlayer is an aggregator delivering more than 45 free-to-air channels: the BBC, ITV, Channel 4 and Five being among those available.

In addition, TVPlayer also has agreements in place to stream content from Freeview and Freesat channels such as Al Jazeera, Food Network, 4Music, Euronews and many more.

The service has been downloaded nearly one million times in the UK since it launched, while it's also available through a free TVPlayer app for iOS and Android devices.

And last month, it was revealed that 16 new free-to-air channels had been added to the TVPlayer portfolio - through channel 241 on Freeview HD for those viewers who own a smart TV.

Simplestream founder and CEO Adam Smith said: "We will be investing further in TVPlayer as we seek to build a full TV replacement app, with live streaming and on-demand capabilities for high-quality content.

"We are particularly excited by our content acquisition as major broadcasters increasingly recognise the ability to access a younger demographic of audience through TVPlayer and Simplestream’s Media Manager platform."

Beringea investment manager Rob Hodgkinson added: "The success of TVPlayer to date demonstrates there is significant demand for a multi-device aggregator of live TV in the UK."