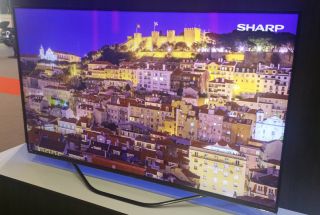 The Sharp brand is hoping to make a return to prominence in the European TV market, with a huge new range of TVs for 2016.

The line-up is led by the flagship CUF8772 TV, a 4K HDR television, and one of six new Ultra HD TV ranges.

There will also be more than 20 HD TVs, complete with smart TV features and wireless streaming, alongside a number of more basic, entry-level TVs.

All TVs with 32-inch screens and above will be equipped with Harman Kardon sound systems.

The Sharp brand is now licensed by UMC (“the largest private TV company in Europe”), which also produces Blaupunkt TVs across Europe, and bought the Sharp factory in Poland in 2014.

It's been around five years since What Hi-Fi? reviewed any Sharp TVs, despite the launch of the UD20 range in 2014, but the company has continued to release models in Japan, notably an 85in 8K model in September last year.

The new range of Sharp TVs is scheduled to launch across Europe in Q1 2017.