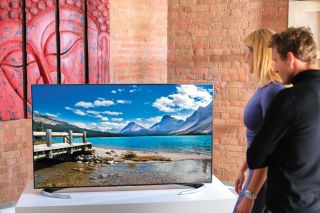 Sharp also says that its UD20 TVs will offer the firm's "unique imaging processing technologies", as it looks to take on the likes of LG, Samsung and Sony on the 4K market in Europe.

According to Sharp, the UD20 series has undergone 400 independent lab tests covering over 100 data points on its way to THX certification. Meanwhile, the sets also come with Yamaha AudioEngine technology on board too.

In terms of smart capabilities, the Aquos Net+ portal will let you access a range of VOD services – including Netflix; online video and music services such as YouTube; and plenty of other apps.

Using the Aquos Remote Lite app, you'll be able to control your UD20 TV with a smartphone or tablet, as well as with voice control – although that feature is limited to Android devices only.

Other features include Miracast and DLNA streaming technology, allowing you to send smartphone or tablet content to the UD20 screen, while four HDMI 2.0 inputs can accept native 4K/60fps signals.

Sharp Europe president of consumer electronics, Alberico Lissoni, said: “The time is right for us to bring our Ultra-HD TVs to Europe. More 4K content is available and it deserves to be played on Sharp TVs."

We're expecting to hear about plenty more new 4K TVs from IFA 2014 in Berlin, with the Toshiba U Series first out of the blocks...