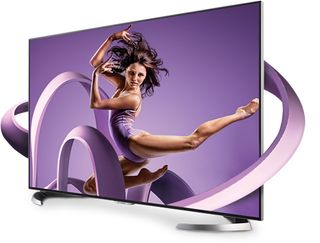 Sharp has been a busy manufacturer at New York's CE Week, having unveiled what it calls the "first wave" of its 2015 home entertainment products that cover two emerging areas of the market.

The company has announced a new line of Aquos-branded Ultra HD 4K LED TVs and a "world first" with the SD-WH1000U high-resolution audio player, in addition to its new Full HD LED TVs.

So, where shall we start?

The screens will also come with four HDMI inputs; 3 USD ports; and the new SmartCentral 3.0 Smart TV Platform, in addition to 35W audio with subwoofer and an ultra-thin aluminium bezel.

The unit will simultaneously stream 7.1 channels of digital audio without the need for cables or wires, supporting a variety of media types and formats – from FLAC to WAV, MP3 to DSD.

Any WISA-compliant speaker system will be able to receive signals up to 24-bit/96kHz from the high-res audio player, transmitting at the 5.2-5.8GHz band to remove potential interferecne.

If you have a traditional passive speaker, however, the Sharp Wireless Bridge (VR-WR100U) will be launched at the same time to open up high-res audio to any hi-fi system with the new player.

And we haven't forgotten about the new Full HD LED TVs coming this September from Sharp. Its new Aquos HD 660 line, like the 4K series, will come in 60in and 70in screen sizes.

Sharp Electronics Marketing Corporation of America president John Herrington said: "Over the last three years Sharp has led the transformation of the home viewing experience with the introductions of 60”, 70”, 80” and 90” class screen sizes.