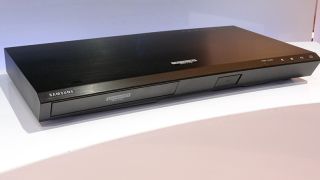 As you'd expect, Samsung had no shortage of announcements and has plenty on the agenda for 2016. Like other AV brands at the show, there was plenty of non-AV news - do you need a smart fridge with stereo speakers and a 21in screen? you're in luck - but there was still enough to see when it comes to audio and video tech for the year ahead.

1. Your TV is getting smarter

Samsung's Internet of Things hub technology wil turn your TV into the master and commander of not just your living room, but your whole house. The fact you'll be able to control compatible products such as lights, door bells and baby monitors through your TV, could take the level of home integration to a new level in 2016. Did you want to stream your TV sound to speakers on your fridge? In 2016, you'll be able to do just that...

We knew a Samsung 4K BD player was on the horizon and now we have more concrete information (not to mention a rival for Panasonic's recently announced 4K BD deck). Samsung's UBD-K8500 is available to pre-order now in the US for $400 and is set to hit shops in March. There are also promising signs on the content front, with Samsung claiming there should be around 100 4K Blu-ray discs hitting the market throughout 2016 from 20th Century Fox alone.

In something of a surprise, Samsung was the latest manufacturer to get in on the Dolby Atmos act - but in the shape of a soundbar. We've already tested Yamaha's Dolby Atmos soundbar, the £1600 YSP-5600 - and now comes news that Samsung has released the HW-K950. It being CES, there has to be a 'world first' element, so it is that this Samsung comes with two detachable wireless rear speakers to make for a unique Atmos soundbar and speaker combination. Looks like Atmos soundbars are a trend for 2016.

Is bigger better? We weren't overly surprised to learn Samsung is launching its own iPad Pro-baiting supersized tablet. but with the added twist of Windows. If there's one thing Samsung doesn't like to do, it's leave a gap in its formidable product range. The 12in TabPro S looks like a cross between a Surface and an iPad Pro and shows there's life in Windows tablets, of all sizes.

Samsung has a new range of SUHD TVs - LG has since coined a startlingly similar term for its TVs - but unlike LG, there was no sign of an OLED screen. Samsung was open about its lack of interest in OLED at the start of 2015 and it seems not much has changed. Which we think is a shame. Samsung's TVs swept the board at the 2015 What Hi-Fi? Awards, so we couldn't help but salivate at the prospect of that TV tech combining with an OLED screen. It may have seemed unlikely ahead of CES but we're still a touch disappointed not to have been given a nice surprise at the company's press conference.