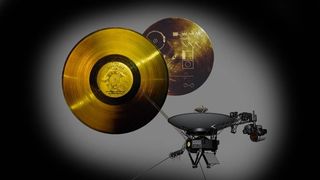 A Kickstarter campaign has been created to fund a remastering of the golden records sent into space on the Voyager crafts in 1977. They promised to contain "the story of Earth expressed in sounds, images, and science".

The recording has an hour and a half of the planet's "greatest music", which includes Chuck Berry's Johnny B. Goode, Louis Armstrong's Melancholy Blues, and an array of classical and world music (sadly there's no room for the What Hi-Fi? Playlist).

The record also features a greeting from the secretary general of the United Nations, Kurt Waldheim, whale song, and "The Sounds of Earth", which includes the Saturn 5 Lift-off, crickets, frogs, birds, hyenas, and elephants.

The original Voyager Golden Record was sent to space on the Voyager crafts in 1977, complete with detailed instructions on how to play it. You can follow our guide to setting up your turntable, should you still need some assistance.