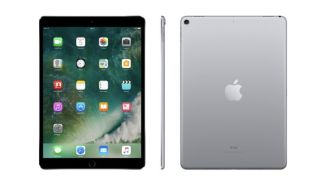 In what is sure to be one of the best Apple Cyber Monday deals, Amazon has slashed the price of an Apple iPad Pro 10.5-inch 64GB Wi-Fi/Cellular model from $751 to just $499.99, offering bargain hunters a whopping $251 saving.

In effect, Amazon is offering 33 per cent discount on the iPad – not something you'd be likely to stumble across in an Apple Store. The 10.5-inch model might not be the latest and greatest iPad Pro – that would be the iPad Pro 11 – but it's still one of the most powerful premium tablets around, with support for TouchID and Apple Pencil.

This is an Amazon Lightning Deal that is valid for 9 hours or until stocks last – and it's likely the latter will be more likely. You can see the percentage of deals claimed just beneath the price so you'll need to act fast.

Apple iPad Pro 64GB WiFi/Cellular $ $499.99 at Amazon
We rated this premium tablet a full five out of five back in 2017, praising its powerful sound, impressive ProMotion display and high-quality cameras. It's since been superseded by the Pro 11, but the good news is that Amazon has knocked £320 off the RRP – making it the equivalent of vintage champagne on a prosecco budget.View Deal

We were hugely impressed by the five-star iPad Pro 10.5-inch, hailing it a "productivity powerhouse" in our 2017 review. The slick design and fantastic image quality combine with a four-speaker system that delivers impressive sound.

The camera shoots decent 4K images and video, while arty types can use the optional first-generation Apple Pencil to doodle. As for gaming, a 64-bit A10X Fusion CPU chip should provide more than enough oomph to power graphics-heavy apps.

Our only real criticism at the time of our review was the steep price, but Amazon's price drop certainly helps address that. Despite the fact that this model has since been trumped by the iPad Pro 11, the iPad Pro 10.5 now represents superb bang for buck: a great opportunity to get your mitts on a turbo-charged tablet at a bargain price.

Cyber Monday deals from around the web