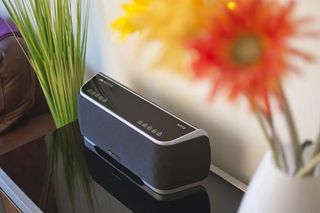 The Sonos-rivalling system is made up of wireless speakers that can be placed around the house and uses standard wi-fi to stream music direct from almost any device: smartphones, tablets, PCs or Macs.

A Kickstarter campaign has been launched by Musaic to raise £60,000, the sum it says is needed to "complete the last leg of the journey from concept to commercial product". The campaign has 12 more days to run.

Bramble said: "Launching our Kickstarter campaign is a huge milestone for us and is the culmination of months of hard work from a very small but incredibly dedicated team."

MORE: Sonos wireless system – everything you need to know

Kickstarter campaigns appear to be the way to go for the hottest audio-visual products at the moment, with London-based Musaic the latest to harness its potential.

The start-up firm is the brainchild of former Cambridge Audio engineering head Matthew Bramble and is behind plans for a new multi-room, wireless music system capable of taking on Sonos.

Musaic is looking to secure £60,000 of additional funding through Kickstarter by 20th April, which it says will allow it to take the new MP5 and MP10 Music Players into production this August.

The players require no cables and use your home wi-fi network to stream music from "almost any device" – including iPhones; iPads; Android smartphones and tablets; and PCs and Macs.

It will also provide instant access to more than 20,000 internet radio stations, with support for a wide range of streaming service apps like Napster, Rhapsody, TuneIn and SomaFM among others.

Both the MP5 and MP10 use a fully digital signal path that won't compress music from its original state, and will include support for studio master quality files at up to 24-bit/192kHz.

The MP5 is designed for use in smaller spaces, while the MP10 will offer "a more powerful sound with added bass". Both incorporate AllJoyn smart home technology to communicate with products from a range of brands including LG and Panasonic.

Musaic's wireless system will let you listen to the same music in each room at the same time, play different songs through individual players, or even group players to play the same music.

You can browse by artist, album or genre; adjust the bass and treble; and select which speakers to use with the free Musaic Control apps for iOS, Android, PC and Mac.

You can now see more information and support Musaic by visiting its Kickstarter campaign here. It's currently hoped that rewards – including the first players – will start shipping in September.

The launch of Musaic's Kickstarter campaign comes a week after Neil Young's PonoMusic took to the crowdfunding platform, reaching its $800,000 fundraising target within hours (and now sitting at more than $4 million).