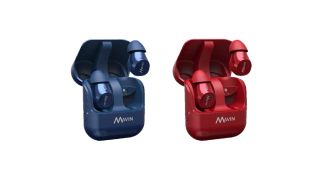 CES 2019 always throws up a few surprises, and one this year is that the most technically capable true wireless headphones yet are being made not by Apple, Samsung or Sennheiser, but by a little-known brand called Mavin.

What makes its Air-X in-ears so special? Largely, it's their wireless range of 100ft. By comparison, the range of standard Bluetooth, which most wireless headphones use for transmission, has a range of about 33ft.

Mavin has achieved this new record by integrating Qualcomm's new QCC3026 (catchy name, right?) chip, which brings further benefits when combined with a phone that uses the Qualcomm Snapdragon 855 or 845 chip, such as the Samsung Galaxy S9 or LG G7 ThinQ. Those benefits include TrueWireless Stereo Plus, which sends audio directly from the phone to each of the two buds, rather one having to send audio on to the other. This is said to have a positive impact on sound quality and battery life.

Speaking of battery life, the Mavin Air-X buds will last for 10 hours from a single charge, but the included charging case adds another 40 hours of use. For reference, Apple's AirPods last around 5 hours per charge, with roughly another 20 added by the case.

All of which makes the Mavins seem rather appealing. Of course, they'll also need to sound great, so we'll be hunting down a pair for review just as soon as possible.