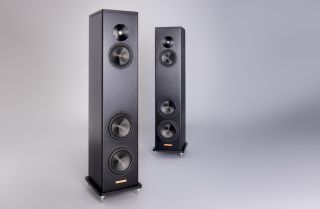 Magico is in a Catch 22 – adamant on delivering speakers with advanced, innovative and costly materials, capable of “uncompromised” sound, but at the same time wanting to expand its audience beyond the ultra-wealthy.

After all, Magico is behind an impressive (indeed eyebrow-raising) portfolio of five- and six-figure speakers, including one of the world’s most expensive.

But it’s managed to launch its most affordable speakers yet: the A3 floorstanders. We’d take “affordable” with a tablespoon of salt, though, as the £11,998 price tag still puts them out of reach for most mortals.

The A3s feature a 28mm beryllium-diaphragm tweeter based on the geometry of the one used in its limited edition M-Project, with the neodymium motor system encased in an improved back chamber.

Magico claims a new 15cm midrange with a carbon Nanographene cone has been chosen for optimal damping and stiffness-to-weight ratio, while dual 18cm woofers employ a version of the new Gen 8 Magico Nano-Tec cone.

All four drivers in the three-way A3 use Magico’s proprietary elliptical crossover technology and, like the enclosure developed for Magico’s Q Series, the A3’s cabinets are made entirely from aircraft-grade aluminum, which is then fully braced and anodized.

The Magico A3s are due on sale in the spring - time to start saving...