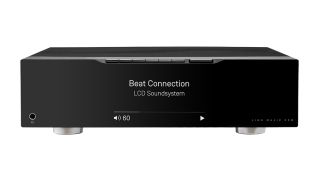 Linn has overhauled its best-selling streaming product of the last decade. The all-new Majik DSM network music streamer arrives eleven years after the original, and falls in line with the new Linn design language debuted in the midrange Selekt DSM, while advancing both the feature set and performance over its predecessor.

Linn's just-add-speakers streamer has been designed to be the nucleus of an AV and hi-fi system, with connections including HDMI and phono.

The 4K-compatible HDMI 2.0 sockets allow TVs, Blu-ray players and games consoles to be connected, while one of the analogue inputs can be configured to moving magnet phono. This is driven by a phono stage that uses hybrid architecture derived from the company’s reference Urika II phono stage.

There’s now a USB Type-B input for hooking up a PC or laptop, a feature absent in its predecessor, while naturally wi-fi and Ethernet connections facilitate network streaming of locally-stored music and playback from music streaming services. This can all be controlled using the Linn App (Android) and Kazoo (iOS).

Bluetooth is also onboard, as is a front-panel 6.3mm headphone jack.

Now onto the technical improvements Linn has made to warrant this next-generation variant: firstly, the DAC architecture – supposedly similar to that found in the Linn Series 3 wireless speaker – has trickled down from the flagship Katalyst, bringing improved upsampling, a lower noise reference voltage and an ultra-low jitter clock for greater timing accuracy.

This 2020 Majik DSM also benefits from digital volume control, which removes a lossy component from the signal path in an effort to prevent distortion. Linn’s Space Optimisation technology, which aims to tailor the performance based on your room and speakers, is also here.

When Linn launched the Selekt DSM streamer (the model above the Majik DSM) almost two years ago, it introduced a reimagined aesthetic – one we called “smart… well made and neatly finished”. The Majik DSM follows its sibling’s lead, with the same stylish chassis, monochromatic display, and useful customisable preset buttons, which offer shortcut access to almost any pinned content.

Replacing the previous model of Majik DSM, which is now discontinued, the new Linn Majik DSM is available to order now, priced £2950. For those after a full system, the matching Majik LP12 turntable and Majik 109 speakers can be bundled with the Majik DSM for a total price of £7650.

12 of the best Linn products of all time