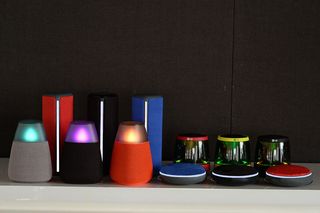 Do you care about sound quality? Are you 'active'? Then these wireless speakers are, supposedly, right up your street. We presume the rest of us might take more convincing.

This new LG Bluetooth speaker range will be officially unveiled at IFA 2016 in a couple of weeks, and features four models: the PH1, PH2, PH3 and PH4. LG claims all four speakers will “deliver the ideal audio solution, indoors or out".

The PH1 is the smallest model and comes with built-in mood lighting and a claimed five-hour battery life. It’s lightweight and portable and can double up as a speakerphone and nightlight.

The PH2 and PH4 are differentiated by a strap that allows them to be attached to a “variety of surfaces”. They’re both water resistant and capable of outputting 360-degree omni-directional sound. Both get a Bass Boost function, but the PH4 gets the added benefit of dual passive radiators to help improve low-end frequencies.

The two speakers have a claimed battery life of six and 10 hours respectively and also feature a 3.5mm auxiliary input for non-Bluetooth devices.

Finally, the PH3 is the party-starter, thanks to a built-in light at the top complete with five different lighting modes. The PH3 also gets an auxiliary input and a 10-hour battery life.

There's no word on pricing or release date information as yet but we'd expect to know by IFA next week, when we'll also presumably get a chance to hear whether they're likely to satisfy those active audiophiles...