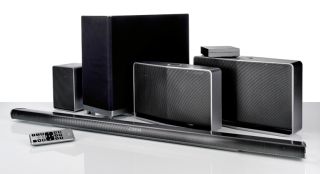 Meridian has long been a player in the development and adoption of hi-res audio, with one of its major milestones being the creation (by the company’s co-founder Bob Stuart) of Master Quality Authenticated (MQA) – an audio technology that stores music as a file that’s small and convenient enough to download or stream without the sonic sacrifices traditionally associated with compression.

And now it seems LG is looking to extend the collaboration with Meridian to an array of its audio products, including soundbars and wireless speakers. Hi-res audio has been part of LG’s roadmap for a while - in 2013 its G2 became the first smartphone to support 24bit/192kHz, and several of its soundbars and wireless multi-room speakers have supported hi-res formats.

What the collaboration means exactly is yet to be seen, but perhaps we’ll see the bearing of its fruit at CES 2018…