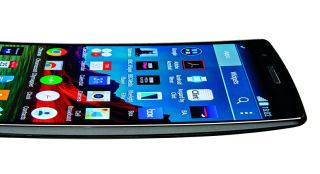 Sony, LG and Samsung have all dipped their toes in the OLED waters, with the two Korean giants more recently focusing on curved OLED TVs, such as the LG 55EC930V and the Samsung KE55S9C. These were joined by prototype bendable TVs at CES 2015, with screens that could curve at the press of a button.

For flexible screens that have made their way into consumer hands, you have to look to the smartphone market and the LG G Flex and G Flex 2.

It isn't only the phone market that LG hopes will push demand for the new technology. LG Display also cites the car industry and wearables market as potential growth areas for flexible OLED screens.

"The main advantage of a flexible OLED display is the screen’s bending feature that is achieved by the use of a plastic substrate instead of a glass substrate as in a conventional OLED display."

LG is promising more design formats, which it says are possible only thanks to flexible OLED. The new E5 production line at the company's Gumi Plant in Gyeongbuk Province, Korea, will aim to produce 7500 sheets a month measuring 1500mm x 1850mm. From these, the company can produce more than 200 5.5in panels.

LG says the new sixth-gen OLED panels should be nearly four times more efficient than previous generations. The efficiency of OLED panels has been an issue historically, though earlier this year LG Display annouced OLED panel yield rate had improved to 65%.

IHS DisplaySearch expects the flexible OLED panel market to see sales increase from $3.5 billion in 2015 to $4.8 billion by 2021.

See all our OLED TV news and reviews