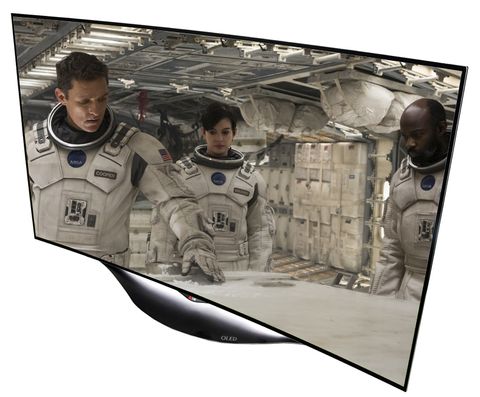 TV technology is in a state of flux. Plasma is all but dead, and emerging technologies are vying for a foothold in the market. Ultra High Definition (or 4K) is exciting but largely absent, with a relative lack of content. OLED has been hailed as the ultimate weapon for years, but is only now priced sensibly enough for mere mortals.

Essentially, nobody knows how the future of televisions will unfold. Perhaps we will see an influx of UHD content next year, perhaps not. What we do know is this: right now, more than 99 per cent of your content will be in Full HD or standard definition. Right now, at 1080p, we’re in love with the LG 55EC930V.

So what’s the fuss about OLED? In theory, it delivers properly dark black levels that are arguably deeper than anything you’ll find on those previously exalted plasmas, while maintaining the punchy brightness of LCD screens; the perfect balance, then.

For the uninitiated, OLED stands for Organic Light Emitting Diode. It’s a panel of self-lighting pixels, which means none of the backlighting panels (and hence uneven backlighting issues) found in LCD screens. When a pixel turns off, it goes pitch-black. Colour reproduction is also richer, with stronger contrast.

LG’s take on OLED means the addition of a fourth (white) sub-pixel to the standard RGB (red, green and blue) group, which the company promises will enhance colour range and accuracy.

In practice, the picture is nothing less than exhilarating. Those promised black levels are not an exaggeration: when the picture is black, it’s truly, deeply black. There's a genuine absence of light, and we can’t ask for more. That’s one significant advantage OLED has over LCD screens, the latter suffering from backlight 'bleed' which allows patches of light to appear on black backgrounds.

When it comes to bright scenes, the LG is just as happy to oblige. It's highly impressive when fed anything colourful, such as a Blu-ray of Guardians of the Galaxy, delivering punchy and vibrant hues. While they’re not overdone, there’s certainly no need to boost saturation in the settings.

The level of contrast impresses too. It’s a dynamic picture, capable of juggling light and dark effortlessly. You do need to be careful with OLED light levels, however – make it too bright and you end up losing out on texture and gradation in light areas. We were very happy with it set at 70 per cent.

There is virtually no picture noise, unlike plasma, which means a wonderfully clear picture. Images are sharply defined. There’s plenty of detail, but none of it is over-etched or tiring. This TV also demonstrates remarkable precision. Areas of light on dark (such as yellow words on black) are kept in check, with none of the halo effects you might find on LCD panels.

Motion is fairly well handled too. Out of the box, the ‘Trumotion’ processing is rather zealous. Even on the more subtle ‘Clear’ setting, there’s a hint of the "soap opera effect" (making broadcasts look overly glossy and smooth) that turns The Avengers into an episode of Coronation Street.

No processing at all, however, leads to a little judder. It’s best to choose the manual option and bump up ‘De-blur’ and ‘De-judder’ a notch or two.

If you still use 3D, we have good news for you. This LG puts in a capable performance. The passive 3D set-up is comfortable to watch, with no flickering. Images are vibrant, even with the tinting on the glasses. The picture could be smoother, with a greater sense of depth, but the overall effect is fast and immersive.

There are four pairs of glasses in the box. Well, two pairs of glasses, and two pairs of shades that you clip onto your own spectacles. That’s an excellent move, LG, for those of us who already wear specs. We move down to standard definition with a DVD and it maintains a decent performance.

Inevitably there’s a jump in noise and a fall in sharpness, but the excellent contrast holds strong. Broadcast pictures tend to look more processed, but the amount of variation on hand suggests it’s more down to individual channel quality.

Sound quality is fine, but not as impressive as the picture. We rarely hear a flat screen we really like, and this LG is no exception. The sound isn’t particularly smooth or weighty, but it’s inoffensive enough for casual viewing. For films, we’d certainly recommend getting external speakers or a soundbar.

Now, let’s talk about the curve. This is a curved TV. Why? There is no definitive reason, and only some murmurs about eye ergonomics. Does it work? We’re still divided on the matter. Some of us find it natural and immersive, giving more depth to the picture, like a very mild form of 3D without wearing special glasses.

Others might see it as a distracting gimmick. The curve is not particularly pronounced, and the effect is not prominent. Viewing from the side feels a little odd, as the picture doesn’t taper away uniformly like you’d expect from a flat screen. But, despite the slight curve, you can mount the TV on the wall if you wish.

The best position for optimal view is dead centre, but that doesn’t mean an exclusive ‘sweet spot’. Feel free to move about on the sofa. It was only when we got past about 35-degrees from centre that the picture started to look warped.

The rest of the design is less fancy, but quite beautiful. There’s barely any bezel to speak off, and much of the screen is wafer-thin. Peeking out from below is a simple metal stand. It’s an understated affair, much more elegant than the wavy sheet of Perspex that supported LG’s last effort.

A generous selection of ports includes four HDMI 1.4 inputs, three USB 2.0 ports, an optical out, a headphone out, and adapter ports for legacy connections (SCART, composite, component). There’s an ethernet socket, but wi-fi is also present.

Two remote controls are included: the standard button-stick and a fancy banana-shaped ‘Magic Remote’. This has built-in gyroscopes that sense your movements – to control the on-screen cursor.

Pointing-and-clicking is the best way to navigate this TV. It’s all part of LG’s WebOS: a super-slick smart platform that lets you multitask and juggle live TV with all your inputs and apps. Switching through various sources is seamless, like changing channels. It’s lovely to use.

The app offering is decent, but not quite comprehensive. You get the big guns: BBC iPlayer, Netflix, Amazon Instant Video, Now TV and YouTube – but currently there’s no sign of 4oD or ITV Player.

All your sources are laid out neatly in the ‘Launcher’, appearing as pop-up tiles in a neat line. Simply choose one or get rid of them to resume viewing. No faffing with home screens and hubs.

The LG 55EC930V can’t do 4K. And while it would be tempting to knock it for this reason, we won’t. Currently, there is very little 4K content – save for the two TV series on Netflix and the odd video on YouTube.

There’s no telling when more content will come, and we’re not holding our breath. It’s a changing landscape and anything could happen. Meanwhile, this LG’s OLED beauty is real, and it’s offering to do a wonderful job of your content – right now – for a reasonable price.

If you want to make the most of what you’re watching today, it should be taken very seriously indeed.