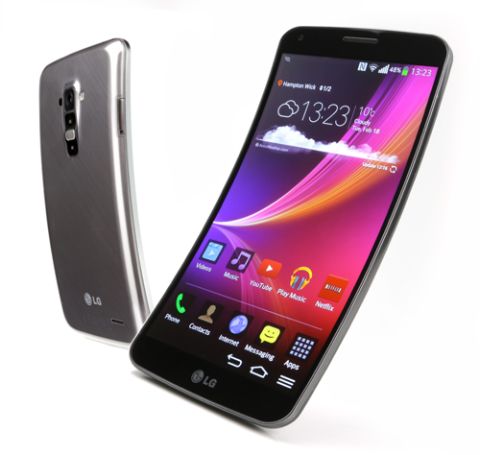 If you can forgive the lower res screen, the G Flex offers all the goodness of the G2 with an added curvy cool factor

LG is back and it’s innovating – that’s the message the Korean company is keen to get out there.

After several years on the smartphone sidelines, it’s doing all it can to make up for lost time, and just one look at the G Flex tells you it means business.

Pushing boundaries with design in the same way G2 did with high-res music, its curved, flexible shape makes for a great conversation starter down the pub, and it’s quite the technical marvel.

But what could all too easily be dismissed as a gimmick on first glance is actually quite something when you start to use it.

It sits in your hand nicely for both landscape and portrait use, will fit perfectly into most back pockets and curves well to the side of your face for calls.

Would we pick it over other smartphones, purely for its design? Probably not, but it’s an early adopter’s dream.

It’s flexible too, which adds a durable edge to its design charm, and comes with a few built-in party tricks.

Place it face down on a desk and you can put pressure on it that’ll near on flatten it without issue. Plus, it features a self-healing back panel that’ll take the surface scratches caused by keys, coins and knocks and make them disappear.

Don’t try and test its limits though – this is no miracle cure for out-and-out carelessness.

It is big though. We’re loath to knock it for that because, if you’re even considering it, its size isn’t something that concerns you.

Even so, six inches sits very much in that grey area between phone and tablet for us, and we’d definitely recommend seeing it in the flesh before committing.

It dwarfs the iPhone and even makes the 5.2-inch G2 look small, but it has kept the bezel down to a minimum to make sure you get maximum screen real estate for minimum phone bulk.

Its size does mean one-handed use can be next to impossible without some serious finger gymnastics, but LG has included some software tweaks to help improve that.

Both the dialler and keyboard can be made smaller and shifted to the left or right of the screen, as can the three main touch buttons at the bottom of the display, which is genuinely useful.

LG has included its ‘Knock On’ feature, meaning you can wake the phone with a well judged double tap to the screen instead of reaching for an unlock button, and there are some nice gesture controls to make things easier too, such as answering a call by moving the G Flex to your ear or silence your alarm by turning it over.

Finally, the rear-mounted buttons that debuted on the G2 appear here too, but have had some usability tweaks in that they are now slightly more prominent for easier pressing, and the unlock button now glows in differing colours to show when you have notifications.

They’re still a touch too close to the camera lens for our liking though, but sit in a very comfortable place that means using them becomes second nature pretty quickly.

Spec-wise, this is largely a G2 in a larger body. It features the same snappy 2.2GHz quad-core Qualcomm processor, offers 2GB RAM and packs 32GB of non-expandable storage, which dips to 24GB after making way for the Android 4.2.2 Jelly Bean operating system.

It also offers the same 13MP camera and all the high-res music capabilities of its smaller brother, but more on those later.

When it comes to performance, the G Flex feels quick and responsive to use and powers through multitasking without a second thought.

Menus swipe without lag, web pages load quickly and games run smoothly – there’s certainly no grumbles to be had here; this is a high-end performance. Something you’d expect from a phone with a £590 SIM-free price tag.

What you might not expect though, is a 720p screen, and we’re lost as to why LG chose this route for the G Flex.

If you’re buying a phone with a six-inch screen, that screen is probably one of the main selling points.

Given that most of its competitors offer a 1080p screen, it feels hard to defend, particularly given its sky-high price tag.

This drop in resolution is noticeable, particularly at this screen size, and if you’re coming from a 1080p screen, it will take some adjusting to.

There’s a definite grain to the screen, and while you won’t see too much difference in web browsing and the like, video quality takes a knock.

Finer detail is missing, images are noisier and there’s an overall lack of crispness, some fuzzy edges and outlines creeping in.

While colours appear natural and well presented, gradients of colour have a slightly pixelated step change rather than a more natural spread from light to dark.

The G Flex’s POLED screen does help with strong contrast levels though, offering deep blacks and bright whites, but the subtlety in whites is lacking.

Whereas on the G2 you could pick out textures and shades within whites, the G Flex tends to overdo them, going for out and out brightness over detail.

While this lower-quality screen is a big shame, it does allow the G Flex a good battery life.

At 3500mAh, it’s bigger than the battery in the G2, but even with the extra screen to power, heavy users could easily get more than a day’s use, and we reckon moderate users could even eke out two days.

Of course, video marathons are likely to drain the battery somewhat; streaming a 90-minute movie over wi-fi on half brightness in our test used up 20 per cent of the battery life.

Make sure you use the included charger for the fastest charging times too.

Music performance on the G Flex is a similar story as on the LG G2. The high-res music smarts are present and correct, meaning you can knock yourself out uploading 24-bit/192kHz tracks and albums, or stick to regular CD rips and MP3s.

While we applaud LG for helping to push high-res music into the mainstream, its execution is only a partial success.

Listening to Lorde’s Royals in high-res, there is immediately much more subtlety and real sense of texture to the instruments, vocals and harmonies compared with its MP3 counterpart.

Clarity is impressive too and there are layers upon layers of finer detail that you’ll not be used to hearing through a phone.

That said, it doesn’t quite have the rhythmic wherewithal or percussive drive to carry a track in the same way the iPhone has.

The bass might have depth but it doesn’t have the punch and impact you’ll hear on a regular-resolution track on Apple’s handset, and while that phone’s detail levels might not be as high, we’d argue the way the iPhone arranges the detail it does have makes for a better audio experience overall.

We found the camera on the G Flex to be a bit of a disappointment.

While its 13MP spec sounds impressive, and the camera app is well stocked and nice to use, the results are pretty underwhelming compared with the competition.

It’s not helped by its lack of optical image stabilisation, found on the G2 but left out on the G Flex, which would usually help to correct any image wobbles and improve lower-light shots.

This results in images that are often soft, noisy and lack detail, particularly in artificial light.

Like many camera phones, the G Flex fares much better in natural light than indoors, where colours appear largely accurate, images are cleaner and detail levels improved.

Finally, LG has included a 3840 x 2160 4K video-capture mode on the G Flex for making your own 4K ultra-high-definition content. Well, someone’s got to…

There’s no doubt that the LG G Flex is an impressive phone. Its problem is it has a seriously capable smaller brother in the G2 at nearly half the price, and a number of big-screen competitors snapping at its heels with full HD screens.

At this price, we can’t understand why LG has gone with a lower-res screen, when the screen is likely to be one of the main reasons someone will buy it.

But then there is that excellent battery life to consider, not to mention a snappy performance and some great software tweaks that make it a joy to use.

If you can let the lower-res screen slide, this is ultimately all that’s great about the G2 in a larger form and with a distinctive, head-turning design.

For those that want to stay ahead of the curve, the LG G Flex is certainly worth considering.