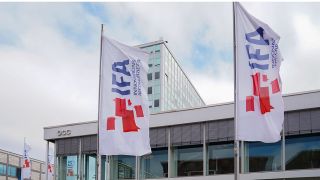 IFA Berlin will go ahead this year, but not as we have known it.

The 96th year of Europe's biggest annual consumer electronics show will take place as an "innovative new concept", following the decision by the Berlin government to ban all events with more than 5000 participants until 24th October.

The organisers tweeted that Internationale Funkausstellung Berlin "will not be able to go ahead as usual" in early September due to these government restrictions. After all, the show typically sees almost 2000 exhibitors occupying 160,000 square metres of show floor space at the Messegelände Berlin ExpoCenter City – and visitor attendance is around a quarter of a million.

But, lo and behold, IFA 2020 is set to take place in some shape or form. Having anticipated such disruption and spent several weeks discussing alternative arrangements, the organisers, with a 'show must go on' determination, say planning is now "well advanced" for a concept that will still allow IFA to be a global showcase for technology. They will present the details of its concept in "the near future".

#IFA20: Set for an innovative concept designed for unprecedented times.IFA Berlin is set to go ahead in 2020, but with an innovative new concept, following the decision by the Berlin government to ban all events with more than 5,000 participants until 24 October 2020. 1/6 pic.twitter.com/MLDvamLXzfApril 21, 2020

The official statement in full is below:

"IFA Berlin is set to go ahead in 2020, but with an innovative new concept, following the decision by the Berlin government to ban all events with more than 5,000 participants until 24 October 2020.

"As a result, IFA Berlin, the world's most significant trade show for consumer electronics and home appliances, will not be able to go ahead as usual.
The organizers of IFA, gfu and Messe Berlin, anticipated this development and for several weeks now have been discussing a range of alternative concepts.

"Planning is well advanced for a concept that will allow IFA to deliver on its core functions for our industry – as a global showcase for technology innovation and an important meeting place for brands, manufacturers, retailers and media. gfu and Messe Berlin will present the details of its updated concept for IFA 2020 in the near future.

"Hans-Joachim Kamp, Chairman of the Supervisory Board of gfu Consumer und Home Electronics, explains: "We expected this development given the constantly evolving pandemic and appreciate that we have now a clear regulatory framework that enables us, our partner Messe Berlin, and our exhibitors to make detailed plans for IFA 2020 ".

The Coronavirus pandemic has of course taken a toll on the consumer electronics events calendar this year, with Mobile World Congress, High End Munich and E3 all cancelled, and Record Store Day postponed, due to enforced crowd and lockdown restrictions. We, therefore, welcome the news of an unconventional replacement for IFA, which could encourage brands to go ahead with product announcements and provide a virtual stage for keynotes.

IFA 2019 was typically fruitful when it came to product launches, with Sonos introducing its portable Move speaker, Sennheiser unveiling its next-generation Momentum Wireless headphones, Cambridge Audio announcing an update to its midrange stereo amplifier range, and Philips stealing the TV spotlight with its all-singing all-dancing OLED+984 model. And that's calling out just a handful.

Anticipated launches for this year's show include the highly rumoured Sony WH-1000XM4 wireless headphones and new TV and audio kit from a now revived Loewe.

Music quiz: Can you name the best-selling vinyl records of the last decade?