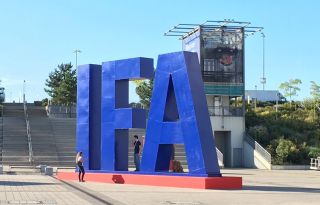 IFA 2016 is under way and will once again play host to a wealth of consumer electronics brands, big and small, with a plethora of new products to be announced.

As ever, expect news from the likes of AKG, LG, Panasonic, Philips, Samsung, Sennheiser and Sony, with 4K (and 8K) TVs expected to take centre stage alongside wireless headphones and speakers, and the possibility of new, more affordable Ultra HD Blu-ray players.

See more from IFA by following What Hi-Fi? on Instagram and Snapchat.

Technics SL-1200G to go on sale this month

Toshiba partners with Vestel for a new European presence

Sharp returns with more than 50 HD and 4K TVs

IFA 2016 trends are likely to include a focus on 4K Ultra HD, both new 4K TVs, maybe including OLED sets, and 4K Blu-ray players - the first 4K Blu-ray player was introduced at IFA 2015, after all.

Dolby Atmos and DTS:X will likely be central to many of the home cinema annoucements as the two surround sound technologies become more advanced and more products begin to support the technology.

No technology show can pass without any mobile-related news, and both Microsoft and Samsung could bolster their portable product portfolios, with both the Samsung Gear S3 and the the first Microsoft Surface smartphone outside bets to make an appearance at IFA 2016.

Of course, there are always surprises; last year Panasonic revealed a rug with a built-in 6.1 sound system, we saw the world's first truly wireless earphones from Onkyo and of course first heard of the return of Technics turntables.

Creative will have a number of new products at IFA 2016, including the Sound BlasterX Katana soundbar, the Creative Nuno Series of Bluetooth speakers and the Creative Flex foldable headphones.

Dali's new portable wireless speaker, the Katch, will be showcased at the exhibition. The device has a pair of 3.5in aluminium woofers and 21mm soft-dome tweeters on its front and back, fuelled by a 2600mAh internal battery that is said to last for 24 hours.

Class D amplification provides a claimed 18 watts of power. The Katch also features Bluetooth 4.0 with apt-X, Chromecast and NFC support, and can also be connected to via a 3.5mm audio jack.

MORE: Dali releases details about the “truly portable speaker” it will unveil at IFA 2016

Epson will be showing off its latest range of projectors, the EH-TW7300, EH-TW9300 and EH-TW9300W. The latest Moverio BT300 smart glasses will also be on show.

We know that Kenwood is going to be bringing a few pairs of headphones to the exhibit - specifically the KH-KR900, KH-CR500 and KH-SR800 brand.

However we are much more eagerly awaiting further details on JVC's new 4K HDR laser projector, the D-ILA BLUEscent. So far we've only seen a stylish, yet vague, trailer...

OLED televisions look to be the new standard in TV quality, and no doubt plenty of show space will be given over to LG's 2016 4K OLED TV range, though they could all be over-shadowed, literally, by the monstrous 105in curved 4K TV that LG revealed at CES 2014, complete with its 11 million pixels. Will we see new LG TVs at IFA? While we're still holding out, we do know that they'll be demonstrating HDR technology that will work in conjunction with High Frame Rate (HFR) and Hybrid Gamma Log (HLG) content.

LG has confirmed it will be holding an art exhibition to show off the entire Signature series of products. The OLED65G6V will be in attendance, alongside its bigger 77in brother, as well as the rest of the Signature range - a fridge/frezzer, washing machine and air purifier.

The company also has plans for flexible OLED screens, including a phone that can be folded-out to double as a tablet, so we wouldn't rule out a first look at something like this.

Speaking of phones, LG is also going to be introducing the V20 smartphone, which will be the the first to feature a 32-bit Hi-Fi Quad DAC built-in to achieve a higher quality of audio. However, LG has not yet revealed information about which headphones will be compatable with the device.

And that's not all, LG will also be officially unveiling a new four-strong range of wireless Bluetooth speakers designed for "active lifestyle audiophiles". The range has various features including mood lighting, water-resistant bodies and 360-degree sound.

Last year we saw Panasonic's first 4K OLED at IFA, so we're hopeful of seeing something similarly impressive this time around. More 4K OLEDs? That would do for us.

Panasonic is going big on wireless audio in 2016 with headphones and multi-room systems once again on the agenda. Expect brand new Bluetooth headphones and new additions to its ALL Series of wi-fi speakers.

Panasonic's DMP-UB900 4K machine has set the early pace in the market but could it be time for a new Ultra HD Blu-ray player? Panasonic has confirmed an "expanding ecosystem" will be on display at IFA and we're hoping this points to a European debut for its DMP-UB90, a new 4K Blu-ray player recently unveiled in Japan.

Phillips has a full range of 2016 TVs to show-off at IFA so we wouldn't necessarily bet on any new models, but we would bet on the European brand having plenty of smaller products to shout about, from wireless speakers to soundbars to smart lightbulbs. And a typically bizarre press conference.

Rumour has it that the Gear S3 smartwatch is going to make an appearance at IFA, but beyond that we can only speculate. The recently released Galaxy Note 7 will no doubt be on show, and we look forward to hearing more about the phone's unique ability to stream HDR video. High Dynamic Range is the maximum amount of contrast between the darkest blacks and the brightest whites, and this is the first compatible phone.

Samsung presented the world's first Ultra HD Blu-ray player at IFA 2015, so a follow up to the UBD-K8500 wouldn't be too surpising. It's possible that we'll see some new TVs from the company, and we will almost certainly see the updated Galaxy VR on display, but beyond that we will have to wait and see.

Sennheiser has a host of four- and five-star products to show, be they in-ear headphones like the IE 800 and the Momentum In-Ear (M2 IEG), or over-ears like the the HD630VB. Lest we forget, the latest version of the famous Sennheiser Orpheus headphones will likely also make an appearance. New headphones and headphone amps? Almost certainly.

Sharp is a brand we see less and less of when it comes to consumer TVs but it's promising to show 8K and frameless displays at IFA 2016, which we'll be sure to give the once over.

Sonos will hopefully be showing off its updated Sonos speakers with Spotify Connect and Amazon voice control. The updates are coming next month (and next year in Amazon's case) but we're hoping to see it in action at IFA.

Sony has a new flagship TV range, the Bravia ZD9 Series, to show off (or you could watch our unboxing video of the Sony 65in ZD9).

And we'd expect hi-res music to be a focus for any new audio products, whether that be hi-res headphones, portable music players like the NW-ZX100H, or hi-fi systems such as the CAS-1, which was launched at IFA last year.