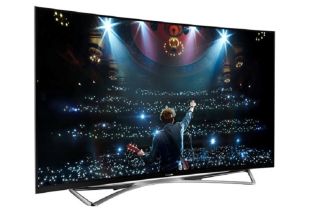 Panasonic has come sprinting out of the blocks at IFA this year, announcing its first 4K OLED TV, the 65-inch TX-65CZ950.

Following in the footsteps of the LG 55EG960V, Panasonic is promising a class-leading level of performance from its latest addition to the 4K Pro premium TV range, which joins the CX800 and CR850 sets.

While 4K resolution screen and OLED technology are the headline-grabbers, there's support for HDR technology, too - a type of 4K content, driven by the likes of Netflix, that looks set to become increasingly popular.

It's the first 4K OLED to be THX certified, having been through "over 400 laboratory tests" to receive the THX badge.

It also has the Hollywood seal of approval, the picture having been tuned and approved by Hollywood colourist Mike Sowa.

The TX-65CZ950 will include a True Cinema picture setting mode should you want to get the Hollywood treatment (Sowa's settings) at the touch of a button.

Panasonic has long stressed its ties with Hollywood and the people behind the movies, thanks in part to the long-running Panasonic Hollywood Laboratory.

Absolute Black is the name Panasonic applies to its deeper-than-ever black levels, which it says will master the tricky step from complete darkness to a level of just above.

Seeing "just what the director intended" is again a theme, with Panasonic claiming that only its new 4K OLED will deliver all of the necessary low-light detail.

Inside the 4K OLED is the 4K Studio Master Processor engine, plus Accurate Colour Drive and Absolute Black Gradation Drive picture technology, to help deliver on that promise.

Last but not least, the Panasonic CZ950 features a design inspired by high-end furniture. It comes with an aluminium pedestal stand, slim profile and gently curved back cover that's upholstered with Alcantara (an artificial suede substitute).

We expect to hear more from Panasonic, and about 4K TV, as the rest of IFA 2015 unfolds...